Heading back to Southern California the Dodgers had the Giants right where they wanted them, which was down two games to none.  San Fran had one trump card left to play, their ace, Juan Marichal.  The high kicking "Dominican Dandy" was trusted to get the Giants back into the series.  His opponent, 1955 World Series MVP, Johnny Podres, was given the assignment to keep it close and hopefully LA could steal the game.  Marichal played prominently in the scoring of San Fran's first run as he led off the top of the 3rd with a clean single to left.  He would move over to second thanks to a beautifully executed sac bunt by Pagan.  Felipe Alou's single to center was not deep enough for Marichal to score, so runners were on 1st and 3rd for the Say Hey kid.  Willie Mays lashed a 2-2 Podres change up into left that a hard charging Tommie Davis barely caught on his shoe top.  Davis wound up sliding head first on the grass and was lucky to keep the ball in the webbing of his glove.  Marichal would walk home from third to give the Jints a 1-0 lead.  The Dodgers would finally score in the bottom of the 5th and take a 2-1 lead when Daryl Spencer led off the inning with a clean single to right.  Spencer wasn't 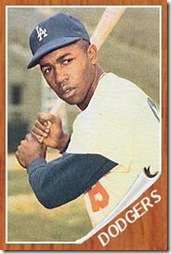 even in the starting lineup when the Dodgers took the field in the 1st, but wound up being pressed into action after veteran Andy Carey booted his second grounder of the inning to load the bases for the Giants.  LA's manager had had enough of Carey's poor display with the leather and yanked him right on the spot, which sent a message to his team that he would not tolerate lackadaisical behavior.  Spencer would capitalize on his opportunity by going 2 for 5 on the day.  He would also score the Dodgers first run of the day on a two run single by Junior Gilliam.  Prior to Gilliam's single Maury Wills, who singled himself, stole second to put both runners in scoring position.  Once again Wills' legs played a prominent role in the Dodger offense. 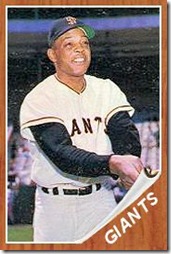 As the game progressed the Giants started looking like a beaten team.  Only Marichal's guile and assortment of pitches kept the Dodgers off stride and his team in the game.  In the top of the 8th Pagan hit a one hopper that went off Spencer's chest for the Dodgers third error on the day at the "Hot Corner".  Alou popped out to catcher John Roseboro in foul territory for the first out of the inning and Pagan was nailed by Roseboro at second attempting to steal to make it 2 outs.  To make matters worse the man at the plate was Willie Mays, and wouldn't you know it the Say Hey kid launched a double down the right field line that would have scored Pagan if he was still on the base paths.  The Baby Bull, Orlando Cepeda was next to bat and on the first offering hit a clean single to right center to score Mays and tie the game as reliever Larry Sherry couldn’t not protect the lead Podres handed him.  Nether team could push across a run during regulation.  The Dodgers had a chance in the bottom of the 10th when they had runners on the corners with 1 out, but the diminutive Stu Miller was able to get his sinker working and Roseboro hit into a tailor made 6-4-3 DP.  Miller would not be able to produce any miraculous escape acts in the 11th, which started out poorly for him when Manny Mota airmailed a throw from 3rd over Cepeda's head to allow Spencer to reach 1st safely.  Don Drysdale, who is one heck of a hitter for a pitcher, was sent up to bunt.  Miller quickly got 2 strikes on Big D, who was then given the green light to swing away.  Drysdale hit one off the top of the wall in left center that bounded back to the infield which prevented Spencer from scoring the winning running.  Wills came up and hit a bullet right at Pagan who was playing in like the rest of the infield.  Inexplicably Spencer broke for home and was thrown out by 15 feet.  Wills didn't stay on first for too long, as he stole second easily on the 1st pitch.  Gilliam was then given an intentional pass to load the bases and create a force everywhere as well as a possible DP chance.  3-Dog, Willie Davis rendered that strategy useless as he hit a ball just shy of the tack that Mays easily caught and Drysdale easily scored the winning run on.
Los Angeles leads series 3-0

Posted by distantreplay.org at 2:41 AM