1964 LCS Round: #1 overall seeded Redbird punch their ticket to the finals with 5 game win over Bucs 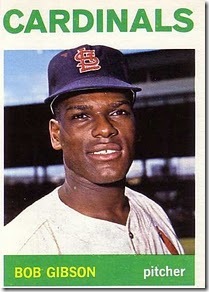 Game one The 1964 St. Louis Cardinals continued to play about as well as a team can in overwhelming the Pittsburgh Pirates in five games. Bob Gibson won two of the games, and was magnificent on the hill. Bob Veale was almost as good for the Buccos, but his teammates could not score runs for him as he lost games by 2-1 and 1-0 scores.

The Redbirds took game with a run in the bottom of the ninth to win a 3-2 nail biter. Pinchitter Johnny Lewis opened the frame by working pitcher Tom Butters for a base on balls. Flamboyant Al McBean took over for Butters, facing the potent top of the Cardinal order, speedsters Curt Flood and Lou Brock. And the speed kings prevailed with Flood sigling Lewis to third, and Brock singling home the winning run.

Gibson went the distance, striking out 10 and not issuing a single walk in the contest, scattering seven hits. Willie Stargell touched him for a home run in the fourth. Brock homered earlier in the game for St. Louis.

Game two was another nip and tuck contest, as Curt Simmons and the 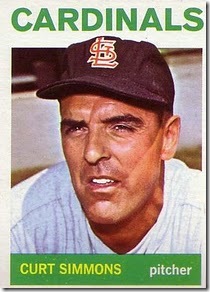 aforementioned Veale both were dominant. Roberto Clemente hit one over the wall in the fourth to put the Pirates on top. Veale was dominant until the sixth, when Brock singled, Bill White walked, and Kenny Boyer singled to load the bases. Dick Groat, who has been a clutch hitter in the entire tourney so far, then doubled down the left field line to plate Brock and White. Veale then reached back and struck out Tim McCarver and after another walk, got Julian Javier on an infield ground out.

Simmons continued his off speed mastery of the Pirates, when Bill Mazeroski lead off the ninth with a double. Knuckleballer Barney Schultz was summoned from the bullpen to face the heart of the Bucs order. He induced ground outs from Clemente and Stargell, and struck out Bob Bailey with the tying run at third to end the contest. 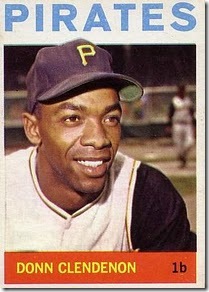 Game Three As the series shifted to Forbes Field, it looked like the Cardinals may be unbeatable as they jumped all over Vern Law with 2 runs in each of the first two innings to stake starter Roger Craig to a 4-0 lead. But the Bucs climbed off the deck with 3 in the second on a walk to Jim Pagliaroni and a Bailey home run. Then Bill Virdon singled with one out, advanced to second when Law was hit by an errant Craig curve ball, and scored on a single by Mazeroski.

The Pirates tied it in the fifth on a lead off home run by Donn Clendenon, as Law had settled down and blanked the Cardinals since the second. They then took the lead on a Mazeroski single and  Stargell double. An out later Bailey singled Stargell home to make it 6-4. Craig finished the inning, and exited for a pinch-hitter in the sixth.

The Pirates added a run in the eighth to make it 7-4, but the Cardinals started the ninth with a bunt single by Javier off of Law, who was replaced by Butters. Butters then surrendered a pinch hit double by former Pirate Bob Skinner, and a Curt Flood single to make the score 7-5, with the tying runs at second and third and no outs. He then got Lou Brock on an infield pop up, and McBean came on to get White and Boyer to preserve the victory.

Game four saw the Cardinals pound out 18 hits and score twelve times, to offset a 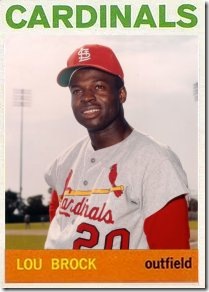 shaky start by Ray Sadecki and get a 12-5 win. The Cardinal bullpen put up five innings of scoreless ball. Bill White and Ken Boyer each drove in four runs, and Lou Brock had four hits to improve his tournament average in an incredible .556. Donn Clendenon had four hits for the Pirates, and Roberto Clemente three as the offenses were in charge in this one.

Game five For the potential clincher, the Cards sent ace Gibson to the mound to face Bob Veale, who had struck out 12 Redbirds in game two. This looked to be a classic pitcher's duel, and turned out to be that and then some. Neither team sniffed anything close to a rally through five innings, as the Cardinals and managed only two singles off of Veale, and Gibson had given up nothing to the Buccos. 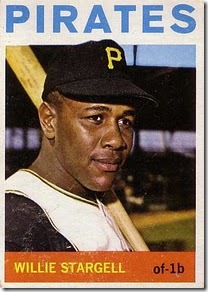 The Cardinals clawed their way to a run in the sixth as Flood and Brock singled to start the frame, then Bill White grounded out forcing Brock, with Flood moving to third. Ken Boyer then squared one up and almost hit it out, but Stargell caught the ball in the warning track in left, while Flood was able to practically walk home.

On they battled through the ninth, with Gibson taking a no-hitter into the final frame. He started the ninth by striking out Bill Mazeroski. The always tough Roberto Clemente hit a sharp one-hopper to Boyer at third, who threw him out. The one batter standing between Gibson and the no-hitter was Willie Stargell, who foiled the bid and put the Pirates in position to at least tie and maybe win the game with a rocket shot into the gap in right center than rolled to the wall. The young Buc slugger wound up at third with a triple!

Suddenly the tying run was at third, but Gibson would not be denied this game and got Jim Pagliaroni on a fly out to shallow left field to finish with a one-hit shutout. He struck out 11 Pirate batters, giving him 21 Ks in his two starts. Veale matched Gibson, striking out 21 Cardinals in his two starts.

Posted by distantreplay.org at 5:23 PM