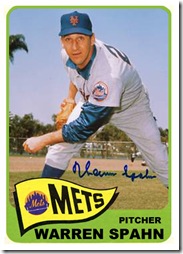 In a battle of future HOF'ers the elder statesman (Warren Spahn) was able to turn back the clock and for at least this day show up father time.  Spahn's day started a bit rocky.  In the bottom of the 1st Ken Boyer greeted the 45 year old southpaw with a two out solo shot to make it 1-0.  In the bottom of the 2nd Julian Javier tripled home Dick Groat and Bob Gibson doubled home Javier to make it 3-0.  Most fans at this point figured the fading Spahn was done and the young World Series MVP (Gibson) was a lock.  That's just how the script was written, until the top of the 4th.  The Amazin's sent 9 batters to the plate and scored 4 runs to give Spahnie his first lead of the game.  Joe Christopher's two run blast made it 3-2.  Greg Goossen's RBI single was followed up by Spahn executing a perfect squeeze play.  Neither team would be able to muster up any offense the rest of the way.  Spahn would end his day on the long side of the ledger after going 8 nd not yielding a run during his final 6 innings on the hill.  Dennis Ribiant shut the door on the Cards in the 9th.
Mets lead series 1-0 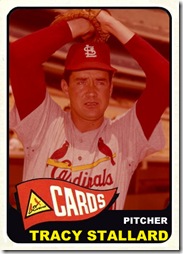 A three hit shutout by Tracy Stallard would be the only story today.  After giving up 2 hits in the bottom of the second to Charlie Smith and Johnny Lewis, Stallard would give up just one more safety the rest of the way (a Joe Christopher double to lead off the 4th).  New York would not get another baserunner over the final 5 innings.  While Stallard was pulling of his mastery of the Mets, his opponent Alvin Jackson, was doing the same to the Cards until St. Louis broke through for 3 runs in the top of the 6th.  Jackson was victimized by an error by second baseman Charlie Smith, but a tailor made around the horn 5-4-3 DP erased most of the trouble.  Jackson was then instructed to walk Boyer, so he could get the much more desired lefty/lefty matchup vs Tim McCarver.  The backstop from Memphis was a bit ticked off at New York's strategy as he delivered a two run double to make it 2-0.  Mike Shannon's single would score McCarver and make it 3-0, which would be more than enough support for Stallard.
Series tied 1-1 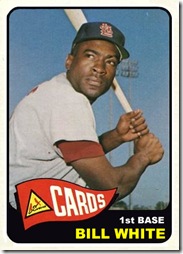 An error by Washburn in the top of the 2nd led to Charlie Smith scoring to make it 1-0 Amazin's.  It stayed that way until the bottom of the 5th.  Met starter Jack Fisher was cruising until the 5th.  In fact he easily got the first two outs of the inning before Julian Javier poked a single to right.  Fisher followed that up by breaking one of baseball's unwritten rules:  "never walk the opposing pitcher".  A wild pitch and a walk to Lou Brock loaded he bases for Curt Flood, who tied the game by working out a walk of his own.  In typical Met fashion bad went to worse when Smith booted a room service hop to second to allow Washburn to score the second run of the inning.  That set the stage for Bill White to deliver the knockout blow, a 2 run single, to make it 4-1.  Curt Flood would single home Brock in the 7th to make it 5-1 as the Cards won this one walking away.
Cardinals win series 2-1

Posted by distantreplay.org at 10:27 AM