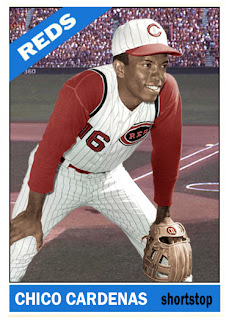 Lee May and Leo, don’t call me Chico, Cardenas did their best to make the Redleg fans forget about that ‘old’ Frank Robinson. May had two homeruns and 4 RBi’s while Leo Cardenas cleared the bases in the Reds 8 run 7th with a grand slam.  Jim Maloney pitched a solid 6 innings allowing 1 earned run before tiring. The Cubbies made it interesting by scoring 6 times in the 9th off of Jack Baldschun before Don Nottebart came on to get the last out. 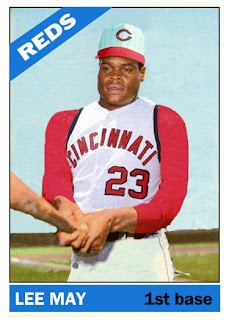 A pitcher’s duel broke out in Wrigley. Fergie Jenkins and Milt Pappas were locked in a 1-1 tie heading into the 7th. The Cubs scored on a solo homer by Billy Williams in the 2nd. The Reds tied it up in the 5th. Then in the 7th the Reds tallied 3 times led by that man again, Lee May.  Lee pinched hit for Johnny Edwards and launched one into the left fields seats and Reds never trailed again. They scored 2 more runs off of Chuck Hartenstein to lead 4-1. It stayed that way until the 9th. Billy McCool, who picked up the save, gave up a 2 run homer to Billy Williams.  Manager Burnette came out and gave McCool a pep talk and he retired Don Kessinger and Randy Hundley to finish off the series for the Reds.
--submitted by Ron Burnette--
Posted by distantreplay.org at 9:15 PM