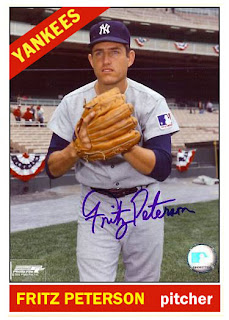 Fans came to the South Side of Chicago expecting a nail biting pitcher's duel between two lefties who were on top of their game vs two stagnant offenses.  They got just what they expected.  Gary Peters was spot on dominant for 7 innings before being lifted for a pinch hitter with runners on the corners and 2 outs.  Peterson, who would eventually go the distance and notch the shutout, had his moments of turbulence.  With 2 out in the bottom of the 2nd Jerry Adair doubled down the left field line.  Knowing that runs would come at a premium today the Chisox waved Ken Berry around third and tried to score him all the way from first.  Yankee leftfielder Tommy Tresh threw the ball to cutoff man Horace Clarke, who relayed a perfect pea to catcher Ellie Howard to erase Berry in a cloud of dust.  A similar scenario would occur again in the bottom of the 4th as the Pale Hose strung together 3 consecutive singles.  Moose Skowron, who was looking for revenge from his former mates, registered the 3rd single, which was a hot smash up the middle.  A hard charging Mickey Mantle, playing on half a leg came up throwing and nailed lead foot Johnny Romano at the plate to keep the scoreless tie in tact.  It would stay scoreless until the top of the 9th when Tresh led off the inning with a 355 foot blast to nirvana.  Fritz Peterson, who grew stronger as the day went on, set the Chisox down in order in the 9th to nail down the 1-0 shutout.
Yankees lead series 1-0 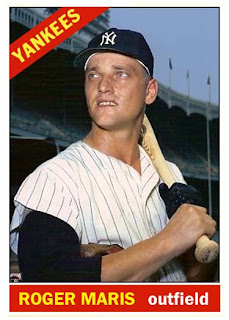 Yankees 4, White Sox 3
Nothing could top yesterday's pitching performances.  Today's game would be just as close as the series opener, but it would feature a bit more balance between pitching and offense.  New York got on the board with a 363 foot 2 run blast by Roger Maris.  Maris' blast plated his M&M boy partner Mickey Mantle (4-4), who is having himself a private renaissance this tournament. Chicago manager Dan Holm said at this point, "2 runs...Chicago scores that many in 2 games...no way of getting 3".  The Chisox must have heard their skipper, because they rebounded for solo runs in the 1st and 5th to tie the game up at 2-2.  New York was scoring their runs with the long ball, while Chicago was forced to grind them out with walks, hits and bunts.  the top of the 8th saw a new pitcher for Chicago, Bob Locker, but a mirror image result of inning 2.  Mantle once again singled to reach base and Maris again delivered a 2 run shot.  This 2 run shot would turn out to be the knockout blow.  The Chisox rallied hard for a run in the bottom of the 8th, but overcoming a 2nd two run deficit was too much to ask.  New York got stellar relief work from Dooley Womack, who came on in the 8th with the bases loaded and pitched out of the jam.
Yankees lead series 2-0 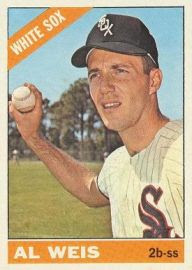 The series shifted twelve hundred miles east to the Big Ball Orchard up in the Bronx.  Yankee fans, who during the regular season were described by their lead WPIX broadcaster Red Barber as, "disguised as empty seats", showed up in droves.  Well over 72,000 including SRO were in attendance to witness their pinstripe heroes trying to do the unthinkable:  win their 3rd playoff series in a row.  Fans were more than just delighted to see their team jump out to a 4-0 lead in the bottom of the first and knock Chicago starter Tommy John out of the box.  Sox manager Holm said, "5 runs ?  Sox score 5 runs in a month, this game is over".  Once again manager Holm inspired his troops to do the unexpected.  Chicago answered the Yankees right back with 3 runs in the top of the 5th off of Jim Bouton, who was quite lucky to get out of the inning without any further damage thanks to a stellar fielding play by Lou Clinton in right.  Off of Tommy McCraw's single, slow footed pinch hitter Smokey Burgess attempted to score from second.  Clinton threw a one hopper to Ellie Howard, who applied the tag to end the carnage.  Clete Boyer singled home a run in the bottom of the 3rd to give New York a 5-3 lead.  The offenses began to slow down during the middle innings.  Bouton was still shaky on the mound, but he was just good enough to wiggle out of trouble until he was lifted after completing the 6th.  The goal was to put the ball in the bullpen's hand to carry the Yankees to victory over the final 3 innings.  Chicago must not have been clued into the plan, because they managed to score a month's worth of runs in the top of the 7th off of lefty Steve Hamilton.  Chicago capitalized heavily on errors by gold glover Clete Boyer, who booted one and launched another into the expensive seats.  Not to make excuses, but Boyer has spent the year jockeying back and forth between his customary hot corner spot and shortstop as the Yankees battled injuries and Tony Kubek's retirement.  Still, Boyer needed to make those plays.  Surrounding Boyer's bookend errors, all with 2 out, were some timely hits by pinch hitter Jerry McNertney and "Mighty Mite" Al Weis.  When the dust all cleared, Hamilton yielded 4 unearned runs and the Southsiders had themselves a 7-5 lead. 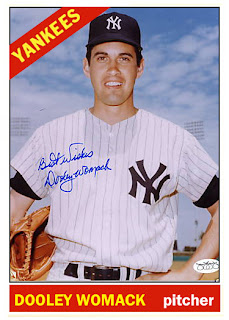 The Bombers failed to answer back in the 7th and the Chisox didn't bother to pad their lead in the 8th.  With time beginning to run out, the Yankees struck back in the bottom of the 8th.  Back to back to back singles by Tresh, Pepitone and pinch hitter Jake Gibbs cut the deficit to 1.  Roger Maris, who took over in right from Clinton, was given and intentional pass to load he bases with 1 out.  With the pitcher due up, rookie Roger Repoz was called upon to pinch hit.  Up by 1 with the bases loaded and 1 out Chisox manager Holm chose to walk Repoz, which plated the tying run.  Holm, who saw how hot Repoz was said after the game, "He was going to knock in at least 2 runs, walking him prevented the Yanks from taking the lead".  Holm's out of the box strategy was designed to cut his loses and escape with a tie.  That decision was rendered moot when Bobby Richardson hit a one hopper back to the box, which should have been an inning ending DP.  Instead reliever Eddie Fisher threw the ball away and Jake Gibbs slid in for the go ahead run.  Horace Clarke would lift a sac fly to center to score Maris and just like that New York went from being 2 down to 2 up.  Sloppy fielding, poor relief pitching (by Wilhelm and Fisher) and some unorthodox decision making did the Southsiders in.  Taking no chances the Bombers brought in Dooley Womack to close out the 9th.  After a lead off single by Skowron, Womack got the next 3 to end the game and the series.  Pete Pamos notched the win having faced just one batter in the 8th before New York's comeback.  New York's offensive star was hometown boy Joe Pepitone (3-4), who knocked in 3, scored 3 and hit a 3 run shot in the first.  New York closes out the unfathomable sweep and heads to the final 4.
Yankees win series 3-0
Posted by distantreplay.org at 9:59 AM