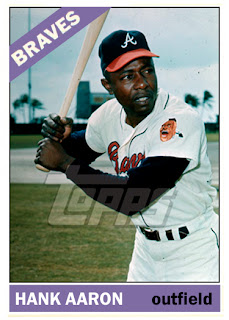 In a very competitive series between two evenly matched clubs, the Atlanta Braves outlasted the Philadelphia Phillies 3 games to 2 to move on in the KOD 1966 tournament.  The Braves were relentless on offense in their three wins, scoring 10, 7, and 7 runs. In the two losses, Phillies pitching dominated holding Atlanta to only 1 run in 18 innings.

Game one was one of these, as Larry Jackson scattered 9 hits over 8 innings while the middle of the Phillies order, Richie Allen, Bill White, and Johnny Callison accounted for 7 hits and five runs scored. Callison was three for four, and left fielder Johnny Briggs drove in three. Tony Clonginger took the loss for the visiting Braves.

Game two saw the Braves pound out 18 hits and put 10 runs on the board, while also getting a four-hit shutout from Ken Johnson to even the series. Felipe Alou had four hits, but the big surprise was number 8 hitter, veteran Frank Bolling. In the lineup more for his defense, Bolling had three hits, slugged a three-run homer and drove in 5. The offensive stars were numerous as Hank Aaron, Rico Carty, Joe Torre, Gene Oliver, and Denis Menke each had two hits.

The series shifted to Atlanta for game three and Braves stayed hot, starting fast against Phillie ace Jim Bunning after Denny Lemaster pitched around an error in the first, scoring two on an Alou single and Henry Aaron homer. The Phillies got one back in the second when with two outs and none on, Dick Groat doubled and after a walk to former Brave Bob Uecker, Bunning doubled Groat home. The Braves stuck for two more in the fourth on singles by Torre and Carty and a triple by Denis Menke. Alou and Aaron did their magic again in the 8th, with Felipe singling, stealing second, and trotting home on Aaron's second homer of the game. Joe Torre followed with solo shot to seal the deal, although the Philles did touch Clay Carroll for two in the ninth on a shot by Cookie Rojas after Tony Taylor had singled.

The Phillies sent young Rick Wise to the mound to try to extend the series in game four, 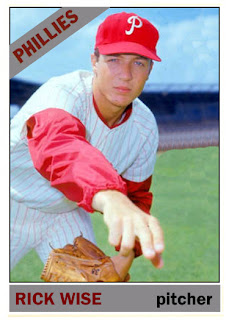 facing lefty Dick Kelley for Atlanta. Wise was up to the task, scattering eight hits, striking out six and not walking anyone in keeping the Braves off the board through 8. He got just enough offense from solo home runs by the youthful Johnny Briggs in the third, and the veteran Bill White in the eighth.

That set up a deciding fifth game in the City of Brotherly Love, where game one starters Larry Jackson and Tony Cloninger met again. The Braves were looking to get better production from the number 2 slot in the order and inserted Gary Geiger in center field to hit in that 2 slot, and he paid immediate dividends lining a one out home run to give the Braves a lead in the top of the first. But the Phillies came right back as Cloninger was wild, walking leadoff man Jackie Brandt then hitting Cookie Rojas. Richie Allen and and Bill White had chances to get the Phillies going early, but each was over anxious and struck out on pitches out of the zone. Johnny Callison waited the erratic Cloninger out and drew a walk to load the bases for Tony Gonzalez, who came through with a two run single to give the Phillies the early lead. Cloninger escaped further trouble and his teammates, or rather teammate,  immediately tied the game in the second as Eddie Mathews reached back for some of his glory years and cranked a long solo home run to right center.

The Braves suffered what looked like it could be a serious blow to their chances when the red hot Felipe Alou, who had gone 11 for 20 in the series with two doubles and two triples, pulled up lame on a ground out leading off the third. Then in the bottom half Johnny Callison homered to put the Phils in front 3-2. Momentum was clearly with the home team. The scored remained 3-2 Phillies through 6, with Larry Jackson once again pitching well and keeping the Braves off the board, if not always off the bases. 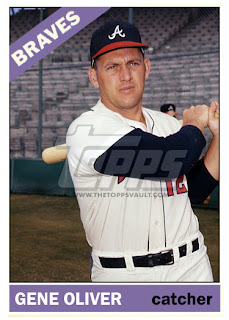 Veteran bench player Lee Thomas was called on to hit for Cloninger to start the seventh, and worked a walk from Jackson. Gene Oliver, hitting well in the series when he played, was the next hitter, entering the game in the third at first base when Alou came up lame. Oliver knew Jackson from their days in St. Louis, and picked on a change up that stayed up in the zone and hammered it over the left field wall to give the Braves a 4-3 lead. Atlanta put three more on the board in the ninth on an error and three singles to take control, and held on to win by the same 7-4 score as game 3.

Meanwhile the Phillies top hitter was Cookie Rojas at .294. Big sticks Richie Allen .167 and Bill White .150 were huge disappointments, with all three of Allen's hits singles and White hitting a solo home run and two singles.
--submitted by Bike Mike Roberts--
Posted by distantreplay.org at 5:23 PM