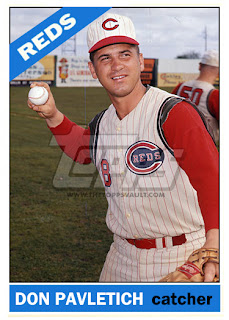 GAME 1 - Candlestick Park
O'Toole vs Marichal
Reds 3, Giants 1
A one out solo shot by catcher Don Pavletich off of the Domenican Dandy broke a scoreless tie in the top of the 5th.  Tommy Harper's RBI single three batters later made it 2-0 Cincy.  Willie Mays' 7th inning double scored Tito Fuentes to cut the Reds lead to 2-1.  San Fran blew a golden opportunity to tie the game as Jim Davenport and Willie McCovey both hit back to back warning track shots.  A Fuentes error in the top of the 9th led to an insurance run for the Reds.  Starter Jim O'Toole never made it out of the 7th, but he did survive those warning track shot.  Don Nottebart finished up the frame and Davidson and Billy McCool finished out the game allowing San Fran just 1 hit over the final 2 1/3. 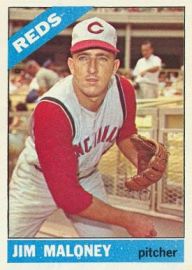 GAME 2 - Candlestick Park
Maloney vs Bolin
Reds 3, Giants 0
Jim Maloney fanned 10 and went the distance with a tidy 3 hit shutout.  Maloney's mastery even handcuffed the great Willie Mays, who fanned 3 times.  Mays did post a double, but never advanced past 2nd.  Giants leadoff man Cap Peterson earned the uncoveted "golden sombrero".  Cincy scored solo runs in the 3rd, 4th and 9th to give Maloney 3 runs to work with.  Leo cardenas started the scoring off with a solo blast in the 3rd.  Art Shamsky went 2 for 4 with an RBI as the Reds took a commanding lead in the series.
Reds lead series 2-0 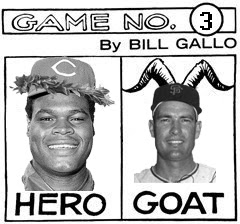 A desperate Giant team with it's back firmly against the wall got on the board in the 3rd when Jesus Alou doubled home Gaylord Perry and Cap Peterson.  Reds starter Milt Pappas fanned Mays and got McCovey and Hart to fly out to end the threat.  The Giants would not score again until the 9th, when they once again had to score.  Down 3-2 the Giants got a game tying homer from an unlikely source in Hal Lanier.  With 2 out Peterson doubled and Alou singled him home for the go ahead run.  Reliever Lindy McDaniel was tasked with getting the final 3 outs, so the Jints could live to see another day.  After a Deron Johnson leadoff single McDaniel fanned Vada Pinson and got Leo Cardenas to ground into a force play.  With 2 outs and a 1 run lead the Giants looked like they were in good shape.  Pinch hitter Jimmy Coker singled to put runners on the corners.  Up stepped rookie Tommy Helms who lined a single to tie the game at 4-4.  Twenty three year old Lee May was called on to pinch hit for Gordy Coleman.  May singled to left on a 2-1 count to score Coker and clinch the upset of the tournament.  Cincy not only defeats the #2 seeded Giants, but they earn an unlikely series sweep.
Reds win series 3-0
Posted by distantreplay.org at 10:07 AM