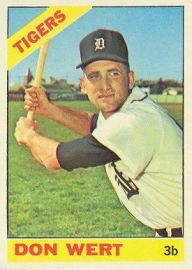 The tone of the game and the entire series was set right from the start, as Detroit sent 12 batters to the plate in the bottom of the 1st inning, and scored 6 runs.  Although they were helped by 4 walks and a Paul Schaal error at 3rd, the Tigers' big blow of the innings was a Don Wert 2-RBI triple.  Angels starter Dean Chance settled down after that, but the damage was done.  Tigers starter Don Wilson, staked to a 6-0 lead, pitched into the 6th inning to get the win.  California made a little noise trying to get back into the game, and even out-hit Detroit 9-5.  But Detroit out-scored California 6-3, and that's all that really mattered.
Tigers lead series 1-0 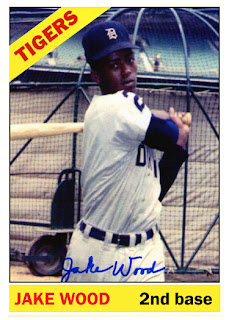 California managed to build  3-1 lead after 3 innings thanks to 2 Jim Fregosi doubles and a bit of wildness from Detroit starter Denny McLain.  But the Tigers answered with 3 runs in the bottom of the 4th thanks to 2-out singles from Jake Wood and Denny McLain, along with a bit of wildness from Angels starter Marcelino Lopez.  Detroit added 3 insurance runs in the 7th off reliever Minnie Rojas behind Al Kaline and Bill Freehan doubles to make the score 7-3.  Again California tried to make it interesting late in the game with Buck Rodgers and Ed Kirkpatrick both hitting solo HRs in the 8th, and by loading the bases with 1 out in the 9th. But Hank Aguirre came on to put out the fire and preserve the win for McLain and the Tigers.
Tigers lead series 2-0 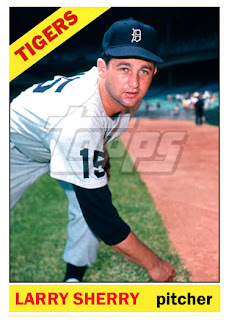 Even though Norm Cash's sac fly in the top of the first put Detroit up 1-0, Rick Reichardt answered with a 2-run HR in the bottom half of the inning to put California on top 2-1.  But Don Wert's solo HR in the 2nd inning and Cash's own solo HR in the 6th put the Tigers back on top 3-2.  The Angels managed to string a couple singles, a walk, and a sacrifice fly together to score twice in the bottom of the 7th, and still led 4-3 going into the top of the 9th.  Then Angels ace reliever Bob Lee was called on to close it out.  Although Willie Horton led off with a walk, Al Kaline grounded into a 4-6-3 double play, bringing the Tigers down to their last out.  But Dick McAuliffe quited the home crown faithful with a solo shot to left center to tie the game at 4 each.  The shaken Lee then gave up a single to Jake Wood and an RBI double to Bill Freehan. And suddenly the Tigers were on top 5-4.  Too stunned to respond, California went quietly in the bottom of the 9th, with closer Larry Sherry striking out the side.
Detroit wins the series 3-0
--submitted by Douglas Zaner--
Posted by distantreplay.org at 3:10 PM