Down 3 games to 2 New York was forced to put their hopes on the right shoulder of 4th starter Rollie Sheldon.  Cincy went with game 2 winner Ken Hunt.  With 2 outs in the bottom of the 2nd Hunt plunked Johnny Blanchard, which brought up Moose Skowron  New York's flat topped first baseman crushed a 2-2 offering and hooked it right inside the foul poll just over the 297 mark to make it 2-0.  Hunt would help his own cause by doubling Johnson over to 3rd, where he easily scored on a Vada Pinson ground out to second to make it 2-1 New York.  Elston Howard would hit a solo shot in the bottom of the 4th to make it 3-1 Yanks, but Gene Freese would go deep in the 6th to bring the Yankee lead back to 1.  Yogi Berra would pinch hit for Sheldon in the bottom of the 7th, so Luis Arroyo was called upon to get 6 outs, which would tie the series.  After striking out Gordy Coleman, Arroyo grooved one to Freese, who hit a Mantle-like blast over the monuments to tie the game at 3.  It was as if all of New York went quiet.  Almost 70,000 fans went silent.  You could drop a pin on the Babe's plaque and hear it echo, that's how quiet the  Stadium got.  Jim Brosnan was easily able to get the Yankees out in the 8th.  Bill Henry would start the 9th, but on his 3rd pitch his day would end abruptly and Charles 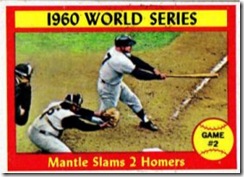 Mickey Mantle hit one high into the upper deck to end the game in dramatic fashion.  The Mick could barely round third before coach Frank Crosettie jumped on his back and took a free ride all the way home.  The normally stoic Bronx Bombers mobbed Mickey at the plate.  The fans lavished the Commerce Comet with chants of "Mickey, Mantle" for 4 long minutes.  At this point one sensed the tide had turned in New York's favor and would not slip back to the Reds.

Less than 24 hours after celebrating The Mick's game winning homer his drinking buddy Whitey Ford was about to take the mound for all the marbles.  Game 7's are nothing new to the Bronx Bombers.  Having a cool cat like Ford on the mound for a game 7 is a decided advantage.  Whitey won 25 games and the Cy Young Award that season.  The Queens native is known for coming up big on the biggest stage.  His opponent Joey Jay was also a 20 game winner.  Jay had a renaissance year after coming over from the Milwaukee Braves where he just never got a chance to pitch.  Once he cracked Cincy's rotation he was the final piece to the puzzle, which put them over the top en route to the pennant.  New York would strike first by scoring 2 runs with 2 outs in the bottom of the 2nd.  Mantle would lead off with a double, but he looked to be stranded at 2nd after Howard and Berra flew out.  Up came Moose Skowron, who was going to have one of those great offensive days.  It started out with line shot double that rolled all the way to the wall in left

center to easily score Mickey.  Clete Boyer would follow that with a line shot single that almost took off Jay's head.  That single would score the Moose and give Ford a 2-0 lead to protect.  This tense game 7 remained 2-0 Yanks until the bottom of the 6th when Mickey led off the inning with a home run off the Ballantine sign on the big scoreboard in right center.  Nobody hits those majestic tape measure shots like the Mick and nobody has ever hit more in the Fall Classic either.  With a 3-0 lead and as Yogi would say, "it was getting late real early over here", Ford looked like a safe bet to put the game away easy.  Not for a second can you think anything is going to be easy when both teams are fighting for a championship.  The top of the 7th looked to be one of those half innings where one pitch can decide it all.  After Frank Robinson and Gordy Coleman singled to put runners on 1st and second with no outs things got real tense.  Most average pitchers crack in these spots, but not the man they call "Slick".  Whitey Ford is that man.  He's got the face of the boy next door but the heart and guts of a riverboat gambler.  Ford was able to get Gene Freese to line out to Clete Boyer at third for the first out of the inning.  Boyer, to those who see him play every day, is viewed as Brooks Robinson's equal with the glove. 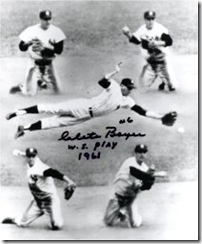 Most say he has the better arm.  Nobody has better timing for the big moment.  That big moment would come on a hot smash hit down the line by Andy Kasko.  Boyer sucked it up like a Hoover vacuum then had the presence of mind to step on third to force Robinson and throw to Skowron at first all in one motion to nail Kasko for the unconventional 5-3 DP to end the inning.  Cincy would once again threaten to score in the following inning (8th).  Gus Bell would double off the wall in right to lead off the inning.  Wally Post would fly to deep left, which allowed Bell to tag up and go to third.  Cincy figured to at least get one run to cut the deficit to 2.  This is where the ridiculous occurred.  Joey Jay was allowed to hit for himself and he lined a shot down the line at third that somehow hit Bell in fair territory to stop play with Bell being automatically out and Jay reaching 1st and getting credit with a single.  Cincy's manager vehemently argued with the plate up, but to no avail.  The play stood as cal and when Vada Pinson struck out looking to end the inning the Reds were now in need of 3 runs with 3 outs left to go.  That mountain would become even harder to climb when Skowron hit a 2 run shot with 2 outs to make it 5-0.  At this moment everyone in the house that Ruth built was thinking "Lock it Up", and they were correct in their thought process.  Ford would walk Ellio Chacon to open the 9th, but strike out Frank Robinson and then get the next two batters in order to clinch the 1961 World Championship for the New York Yankees.  Amazingly the Bronx Bombers rallied from a 3 games to 1 deficit to win this one.  Ford would author a "slick" 7 hit shutout to win it for New York.  Mantle would be voted the series MVP.  The Mick would go 11-26 (.423) and hit 4 homers with 8 RBI, including the walk off homer in game 6.

Posted by distantreplay.org at 12:34 AM