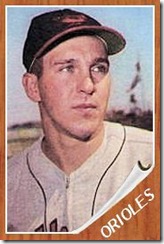 The O's were first to score when Brooks Robinson doubled home the re-incarnated Jerry Adair with two out in the bottom of the first off of Dave Stenhouse.  Washington would take the lead with 2 runs in the 5th off of Chuck Estrada thanks to a Bud Zipfel 2 run homer.  That lead wouldn't last long as Whitey Herzog bunted home Russ Snider on a perfectly executed safety squeeze with the bases loaded and 1 out.  The game remained tied until the bottom of the 7th.  Brooksie singled and moved to second on a balk by Bennie Daniels, who had replaced Stenhouse after Gene Woodling unsuccessfully pinch hit in the top of the inning.  Chuck Hinton booted Gil Brandt's grounder to put runners on 2nd and 3rd.  A walk to Herzog loaded the bases and a deep fly by future hitting guru, Charlie Lau, plated Robinson.  Brandt would score to make it 4-2 on a slow grounder to Hinton by Johnny Temple.  Hoyt Wilhelm came on to close it out for the O's but got booted from the game for contesting balls and strikes...mainly balls.  1960 hero Hal Brown would take his place to lock down the victory to put the O's up 1-0 in the Beltway Series. 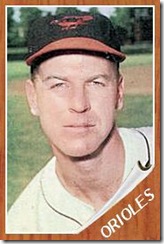 a 2-1 Senator victory.  Washington would need that type of performance from the hard throwing righty from Morgan, GA.  What they got instead was a sub par effort that lasted just 2 innings and was responsible for 4 Baltimore runs.  It is not know if Chenney's performance or the 2+ hour rain delay ended his day.  All we can surmise is that the Nats were in a deep hole down 4-1 after 2 innings.  To their credit relievers Steve Hamilton (3IP), Claude Osteen (2IP) and Pete Burnside (2IP) shut down the O's for the final 7 frames.  Dick Hall, who replaced O's starter Steve Barber in the 3rd, kept up the good work and allowed just 1 run on 5 hits over 6 innings of fantastic relief work.  Washington would threaten in the 6th only to have Don Lock thrown out at the plate by a perfect throw from Russ Snyder after playing Harry Bright's double off the right field wall perfectly.  An almost exact scenario would play out the following inning when Gil Brandt would nail catcher Ken Retzer at the plate as he attempted to tag up and score the second run of the inning.  Those 2 outfield assists were game savers.  Wilhelm would come on to pitch a perfect 9th to notch the save and ensure the series sweep.

Posted by distantreplay.org at 4:25 PM