Tied at 1 apiece and heading into the bottom of the 7th the O's took advantage of some poor defense by the Bosox.  After Jerry Adair singled with 1 out Gil Brandt attempted to bunt him over to second, but a throwing error by Frank Malzone at third allowed Adair to score all the way from first plus Brandt easily walked into second.  Malzone would follow up his first gaffe with a second one in a row as he booted Russ Snyder's slow roller then inexplicably tried to throw to first.  The throw needed a postage stamp since it was air mailed into the dugout, which allowed Brandt to score.  Hoyt Wilhelm would come on board to pitch two perfect innings in relief to save the game for Billy Hoeft, who pitched a scoreless 7th inning and got the win in relief.  Chuck Estrada started and deserved to get the win, but he left after 6 with the score tied 1-1.  Don Schwall was the Boston righthander who was let down by his defense, specifically Malzone.

Monbouquette was diligently protecting.  The score remained tied until the bottom of the 8th when Jerry Adair singled home Whitey Herzog with 1 out.  Hoyt Wilhem would pitch 2 scoreless innings in relief to get the win in relief of Hal Brown, who went 6 and allowed just 1 run on 3 hits.  Monbouquette went the distance and gave up 1 earned run, but could not get any offensive support.  Boston's Pumpsie Green was a home run away from hitting for the cycle.  He recorded 3 of Boston's 5 hits.

Up 3-1 and heading to the bottom of the 9th the O's were poised to get out of Boston with a clean sweep of the Sahx.  With Hoyt Wilhelm on the hill everything looked good.  Frank Malzone led off with a homer that made the crowd cheer, but certainly did not atone him for his defensive gaffes over the past 2 days that cost Boston games.  Rookie Carl Yastrzemski followed with a double and Jackie Jensen walked to put runners on 1st and 2nd.  Gary Geiger bunted the runners up 90 feet and Jim Pagliaroni would get an intentional pass to load the bases and create forces all around.  Yaz would score on a Russ Nixon grounder to tie the game at 3 all.  Pinch hitter Pumpsie Green would single to center to score Jensen to give the Bosox a 4-3 win and stave off elimination. 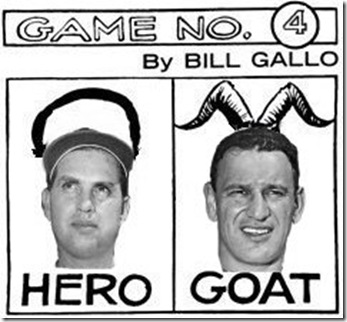 Starters Ike Delock and Jack Fisher both went 7 innings with Fisher leaving the game up by 1 with the score 3-2.  The O's added a solo run in the top of the 8th off of reliever Dave Hillman to give themselves a nice 4-2 lead heading into the bottom of the 8th when the Bosox bats came alive.  Russ Nixon doubled off of Baltimore reliever Wes stock with 1 out.  Boston's Chuck Schilling singled to put runners on the corners for Pete Runnels who promptly singled home Nixon to cut the O's lead to 1.  That set the stage for Frank Malzone to fully atone for the sins of his leather in games 1 and 2.  Malzone lined a bullet off of the Monstah out in left to easily score Schilling.  The ball was hit so hard and played so well by O's Dave Philley that only 1 run could score and Malzone had a long single, which tied the game at 4 all.  It would stay tied at 4 until the top of the 10th when Wilhelm walked with the bases loaded to force in Gil Brandt with 2 outs.  Bosox reliever Tom Brewer did everything but kick himself in the butt for walking the opposing pitcher.  Wilhelm ran into a bit of trouble thanks to Jim Gentile booting a slow roller by Schilling with 1 out.  A passed ball was charged to catcher Gus Triandos, but who could not be blamed, since he was catching a knuckleballer like Hoyt Wilhelm.  That put Schilling on 2nd with 1 out.  Pete Runnels was a tad late on his swing and hit a slow roller to short that Ron Hansen easily fielded and threw to first for out number 2.  It all came down to Wilhelm vs Malzone.  A mano y mano matchup of me who have fluctuated from hero to goat in this series.  This time it was Wilhelm's turn to be hero as he confounded Malzone with 3 straight butterfly knucklers that Malzone couldn't hit if he was swinging a spatula instead of a Louisville Slugger.  Wilhelm's strikeout of Malzone ended this close and entertaining series with the O's heading to Detroit to face the #2 seeded Tigers.

Posted by distantreplay.org at 10:18 PM