Art Mahaffey looked at this Mets lineup and must have thought to himself, "10 years ago it would have been a pennant contender".  Well Mr. Mahaffey some of them were on pennant winners and contenders, but most wouldn't even be in the majors if it weren't for expansion.  You see these Mets were not only bad, they turned out to be the worst team in the history of major league baseball.  The only thing that stopped them from losing 142 games were two rainouts.  For all their poor play the lovable Metsies captivated the heart and soul of National League starved baseball fans in New York.  Those fans who were abandoned by the beloved Brooklyn Dodgers and the well respected New York Giants had nothing to root for for 4 years.  The Mets were so popular, they even outdrew the World Champion Yankees at the box office, even though they played in the dilapidated Polo Grounds.  To start this game #1 Roger Craig was given the honors.  Craig, who was a big Brooklyn Dodger hero in the pennant drives of 1955 and 1956 was obviously a fan favorite for the Mets.  Heading into the 7th inning he had himself a 2-1 lead.  A man who won 10 and lost 24 during the regular  season usually doesn't have 2-1 leads and it showed.  As quick as you can say "Jack Robinson" that 2-1 lead turned into a 6-2 deficit.  A huge 5 run outburst by the Phils in the bottom of the 7th derailed Craig's Cinderella story, and to 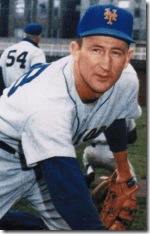 think it all happened with a man on and 2 out.  Roy Sievers singled to put runners on the corners and Ruben Amaro was given an intentional pass, to face the pitcher.  Well the pitcher, Mahaffey, was called back to the dugout and Frank Torre was given the pinch hit honors.  All Craig needed to do was get Torre and get out of the 7th with out any damage.  He would get neither result.  Torre singled up the middle to score Don Demeter and Sievers to make it 3-2 Phillies.  Up next was lead off man left fielder Ted Savage, who hit just 7 homers during the regular season.  All it took was one pitch to make that number 8.  Credit the 257 foot left field porch with the homer, but it was a homer just the same, a 3 run homer.  Stick a fork in the Metsies, because they were done.  As if anyone was shocked. 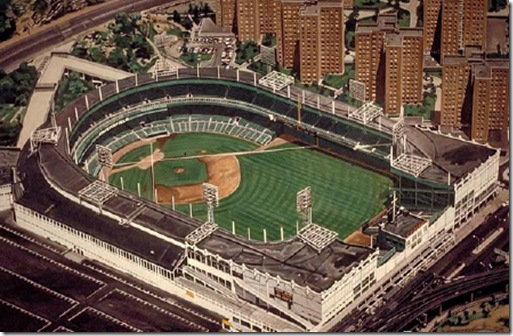 The Polo Grounds was the perfect site for the Mets season to end.  This crumbling

and bumbling ballclub had the perfect ball park to play in, as within 2 years it would crumble to the ground by the same wrecking ball that befell it's cousin Ebbets Field.  As the song says, "Meet the Mets, meet the Mets, step right up and beat (er..great) the Mets.  Bring your kiddies, bring your wife...guaranteed to have the time of their lives".  Obviously the song writer has a warped vision of what a "time of your life" is, unless it's watching your team get a 12-3 shellacking by a sub par opponent.  If that's what one call's the "time of your life" then these fans, 50,000+ strong, partied hearty.  Alvin Jackson started for the Amazin's and was charitably relieved of his duties after just 2 innings.  I say charitably, because only 1 of the 5 runs charged to Jackson was earned.  You see these Metsies don't just lack hitting and pitching, they also field as if they are wearing that gold painted glove that Rawlings gives out every  fall.  "Hot" Rod Kanehl, the poster boy for the "new breed" booted 2 balls of his own as he turned the second base position into his own little private shop of horrors.  The 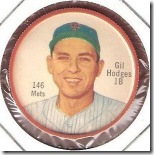 rest of the Met fielders have the range of a 17th century musket, while the offense fires just about as often.  Yes these Mets are dreadful, but the fans can't get enough of them.  Casey Stengel said it best, "Their Amazin', Amazin', Amazin'.  The fans did get on bright moment to revel in.  Brooklyn's most beloved player, Gil Hodges, barely on one leg hit a 2 run homer in the top of the 9th for the fans who love him dearly.  So what if this wasn't game 2 of the '55 series, it was 1955 in their hearts and minds.

Posted by distantreplay.org at 8:13 PM