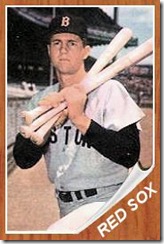 A monstah' 5 run 4th inning chased KC starter Ed Rakow from the hill after he gave up 8 runs and never recorded an out in the 5th.  Bill Monbouquette gave up 4 runs, but 3 weren't his fault.  Second year man Carl Yastrzemski, I think we'll call him Yaz for short hit 2 homers and had 3 RBI's.  First baseman Pete Runnels went 3 for 5 and had 3 RBI's himself.  Manny Jimenez went 3 for 4 and had 3 RBI's thanks to a 3 run homer to supply most of the A's offense. 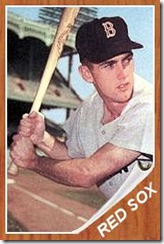 call up Wilbur Wood.  A one hour rain delay in the third inning made short work of young Wood.  That same delay and lack of talent made short work of KC's Bill Fischer who gave up 6 runs on 7 hits in 4 miserable innings of work.  Down 6-3 in the 6th the A's rallied to tie it.  Norm Siebern doubled home Bobby Del Greco for the first run of the inning.  George Alusik walked with the bases loaded to force home Gino Cimoli for run #2, then Haywood Sullivan singled home Siebern to tie it.  Boston scored a solo run in the 7th on a Frank Malzone sac fly to take the lead, so Dick Radatz came on board to close it down.  He was greeted immediately by a Jerry Lumpe solo shot to tie it.  Neither team would score in regulation, so the game headed to extra innings.  Young Diego Segui started the inning for the A's, but couldn't get an out before allowing the Sahx to score 2 runs.  A Chuck "no I'm not Curt" Schilling double was the damage-do-er.  Gary Geiger chipped in with a sac fly for insurance.  Hal Kolstad pitched two scoreless innings to get the win as the Bosox swept the A's in 2 straight.

Posted by distantreplay.org at 8:57 PM