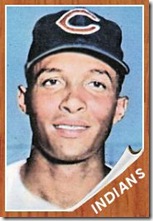 Buck Rodgers doubled home George Thomas...Felix Torres tripled home Rodgers...and finally Dean Chance executed a perfect squeeze play to bring Torres home to give the Angels a 3-0 lead off of Indian starter Dick Donovan in the bottom of the 2nd.  The Tribe chipped away by scoring solo runs in the 5th and the 6th to make it a 3-2 game entering the 9th.  Dan Osinski came on in the top of the 9th to close it out for Chance, who pitched a great game.  Willie Kirland was the first batter Osinski faced and greeted him with a double off the left center wall.  Jerry Kindall struck out looking and Bubba Phillips grounded weakly to short and it looked like Osinski was going to work his way out of it.  Pinch hitter Walt Bond would be down to his last  strike

when Osinski grooved a fastball that wound up one hopping over the wall for a grounds rule double and a tie game.  Bond, who seemed so healthy at the time would tragically pass away 5 years later after losing his battle to leukemia.  It was nice to see him have his moment in the sun here.  Unfortunately for the Tribe, Bond's clutch double was not the game winner.  The Angels would get that game winner the following inning when reliever Gary "Ding Dong" Bell self imploded.  After walking Earl Averill, Bell uncorked two consecutive wild pitches before yielding a 1 out RBI single by Billy Moran.  The undeserved win goes to Osinski as Chance wound up with a no decision.

Playboy Bo Belinsky went 7 innings and gave up just 2 hits.  Belinsky ran out of gas or ran out on a night on the town, one can only speculate...Either way Tom Morgan came on to close it out and had a great 8th inning.  The 9th inning would not be so kind as Bubba Phillips crushed a 3 run homer to give the Tribe a 3-2 lead.  Frank Funk would pitch a clean 9th inning to notch the win an tie the series.

8/4-8/5 - Municipal Stadium
GAME 3 - Angels 2, Indians 1
Leon Wagner led off the top of the second with a long homer to right center.  Five batters 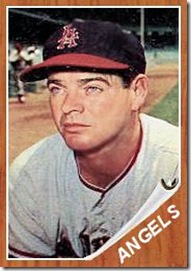 later Angel starter Don Lee lined a single to right to score George Thomas, who doubled after Wagner's homer.  Lee was on his "A" game posted goose eggs in all but one of the 7 innings he toiled.  The lone blemish on his record for the day was a 2 out solo shot by Willie Kirkland in the bottom of the 5th.  The top of the 8th saw Art Fowler replace Lee.  After watching the pen melt down the 2 previous days the Angels went to Fowler in hopes that he could be the closer they so desperately needed.  Fowler responded with a perfect 8th inning and a shaky 9th, which he thankfully was able to survive.  With Johnny Romano on 1st with a lead off single Kirkland hit a shot that died on the warning track safely in Earl Averill's Rawlings glove.  In most ballpark's that shot would have been in the 1st row of the bleachers, but not the cavernous "Mistake by the Lake".  Fowler followed that by jamming Jerry Kindall to get a slow roller to short for an easy force to end it. 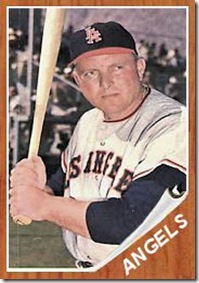 Jim "Mudcat" Grant had the unenviable task of protecting a 1 run lead for 6 innings.  His opponent Ken McBride would have begged to be in Grant's shoes as he was on the short side of the ledger thanks to an unearned run scored in the bottom of the 4th thanks to a passed ball that was charged to Buck Rodgers.  In most cases 1 run leads are like Herman's Hermits singles, they just do not stand the test of time.  This one run lead was no different.  The Halos scored 2 runs in the 7th with consecutive RBI singles by Albie Pearson and Billy Moran.  In the 9th they added 2 more runs on a two out triple by Steve Bilko, which cleared out all the remaining fans in the "Mistake".  McBride, who was pinch hit for by rookie Jim Fregosi (who singled), got the much deserved win thanks to the 2 runs scored during that inning.  Art Fowler for the second day in a row closed out the game and looks to be the Angels preferred choice to close.

Posted by distantreplay.org at 10:27 AM