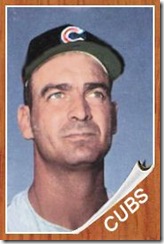 Bob Buhl turned back the hands of time and looked just like a young stallion pitching for the Braves in County Stadium during those great pennant years of the late 50's.  Buhl would go 8 solid innings allowing just 1 unearned run in the bottom of the 1st.  Don Elston would come on board for a perfect 9th inning to get credit for an unofficial stat called a save.  The real story however was the young man playing centerfield, who has been trying so hard to live up to all of the billing he's been getting.  That man is the speedy Lou Brock.  Brock would go 4 for 5 on the day, hit a double and steal a base.  The promise and raw talent that he shows is unbelievable, but can he make it in Chi-town ?

7/29 - Wrigley Field
GAME 2 - Cubs 8, Colt 45's 6
The series moved to the "friendly confines" of Wrigley Field and with that the offensive 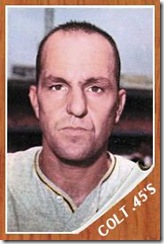 fireworks were displayed.  Houston starter Bob Bruce spotted the Cubbies 4 runs in the bottom of the first.  In most ball parks that would be enough, but not here and not with the wind blowing out and not with the Cub staff throwing balloons.  Cal Koonce gave most of it back by the 6th when Houston erupted for 3 runs to make it 5-4.  The first year Colt 45 team had been impressive all year.  In fact they finished ahead of the established Cubbies in the NL standings, which ate at the Northsiders craw to say the least.  Catcher Hal Smith would homer to lead off that 6th and the rest would be your garden variety small ball.  Houston was missing slugger Roman Mejias who tore cartilage in his left knee in the opener.  The Cubbies would answer back when pinch hitter George Will homered off of Bruce to start the bottom of the 7th.  The 8th would see the Cubbies break it open when Dick Bertell singled home George Altman while pinch hitting for Bob Anderson, who relieved Koonce.  Lou Brock, who was a homer short of the cycle, struck again with an RBI single to score Andre Rodgers.  Close the door this game was  done...well kind of.  Don Elston came on to close it out in the 9th and after walking Carl Warwick he served up a two run shot to Hal Smith for his 2nd of the game.  That cut the lead to 8-6 and everyone in the house began to talk about 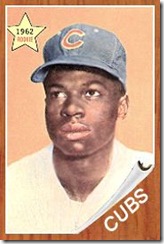 curses and gloom and doom.  Norm Larker was up left and he sent Altman all the way back to the ivy in right center before his shot ran out of gas.  A collective sigh of relief could be heard all along Addison.  Johnny Weekly would walk on 4 pitches to once again give Cub fans more reason to bite their finger nails and chain smoke.  Up stepped Billy Goodman, who had 3 consecutive singles heading into this at bat.  Elston jammed him, but Goodman who handles a bat like a magician handles a wand lined one into shallow left.  1961 ROY Bill Goodman, known more for his lumber than his leather, came out of nowhere to make a smooth diving catch to save the day for the Cubbies.  Hands down Lou Brock was the star of the series going 8 for 10 with three doubles and a triple.

Posted by distantreplay.org at 11:36 PM