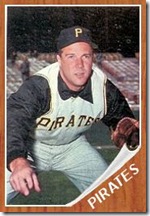 The ancient warrior, Warren Spahn, put forth one of those "New Millenium" Quality Starts by going 6 and giving up 3.  Unfortunately in Spahn's era a quality start culminated in a handshake with the catcher.  That award would go to Bob Friend, who went the distance scattering 7 hits and giving up just 1 run way back in the top of the 2nd when Del Crandall singled home Gus Bell.  The Bucs would answer right back with 2 of their own in the bottom of the inning when Friend got into the action with a 2 out / 2 run single after Spahn gave Don Hoak an intentional pass.  Al Skinner would double home Roberto Clemente in the 3rd to make it 3-1 and in the 7th they added an insurance run on a Dick Groat ground out.

The Bucs jumped out to a quick 3-0 lead thanks to a 2 run shot by Roberto Clemente off  of Bob Shaw, who just couldn't settle down.  Pittsburgh followed Clemente's homer up with 3 consecutive singles with the 3rd (by Smoky Burgess) scoring Al Skinner.  Fans at home could turn off their TV sets at this point since Buc starter Earl Francis was in the zone.  Francis finally ran out of gas with 2 outs in the 8th and relief specialist Elroy Face closed out the shared shutout.

Milwaukee was at the brink of elimination down 4-3 and heading to the bottom of the 9th.  Al McBean had thrown a very nice game and gave way to Face, who looked to close out the game and the series in the 9th.  A one out triple to an unlikely candidate, Joe Adcock, threatened the lead.  A clean single to center by Frank Bolling tied it up one batter later.  All glove / No bat shortstop Roy McMillan stunned the hometown crown with a lead off homer in the bottom of the 10th to win it.  Cecil Butler, who gave up 1 run in 3 innings of work, earned the win. scoreless classic until the top of the 6th when the Bucs came up with two consecutive 2 out singles to score 2 runs.  The great Roberto Clemente singled home Dick Groat, then took second on an errant throw to the plate.  That cost the Braves, because Al Skinner lined a bullet to right to score Clemente.  A solo shot by Joe Adcock to lead off the 7th would cut Pittsburgh's lead to 2-1.  The Bucs would go back up by 2 in the 8th when Clemente once again came up with a clutch two out single to score Groat, who had doubled just like he did in the 6th.  Al Skinner hit one to the base of the wall that Aaron made a leaping catch on, otherwise the Braves would have been down by 4.  Friend made quick work of the Braves in the 8th and 9th innings to close out the game with a very economical 99 pitches.  The Bucs take the series 3 games to 1.

Posted by distantreplay.org at 11:49 PM