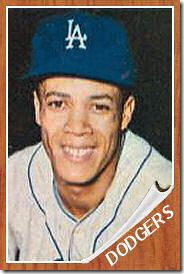 After having his first really successful season Sandy Koufax embarked on 1962 looking to take the next step in his natural ascension to greatness.  This game would not be a positive step for the hard throwing Brooklyn native.  Koufax did garner the win, but the 6 runs that he gave up in 5 innings worth of work would be nothing to write home about.  His opposing number Jack Hamilton wouldn't even last 5 innings as he gave up 8 (6 earned).  This would be a day for the lumber and not the arms.  With the game tied a 3 after just 2 innings LA exploded for 5 runs in the bottom of the 3rd.  Philly answered back with 2 in the 4th and 1 in the 5th before the relief pitching settled things down.  Dallas Green went 3 1/3 and gave up 2, while Stan Williams gave up only 1 in 4 innings.  Williams' performance on most days would get him the game ball, but when the offense posts 10 runs on 16 hits you have to give it to one of the regulars.  Maury Wills, who went 3 for 5 with 2 runs scored, an RBI and a stolen base takes top billing today.  Tommy Davis also had a 3 for 5 day, but he electric Wills got the nod.  Interestingly the lone homer hit today was by Philly's banjo hitting shortstop Bobby Wine.

GAME 2 - Dodgers 7, Phillies 2
The Phightin's carried a 2-1 lead into the bottom of the 4th when the Dodgers got their

mojo going.  Consecutive RBI singles by Ron Fairly and Larry Burright were followed by a long sac fly by Don Drysdale.  "Big D" settled down after giving up solo runs in the first to frames to shut the Phils out the rest of the way.  Once Drysdale found his goove he was unbeatable as evidenced by the 11 k's that he posted.  Philly slugger Johnny Callison was a 3 time victim of Drysdale.  Philly starter Art Mahaffey went the distance and gave up 7.  He remained in the game to rest the pen and take one for the team.  John Roseboro was the only Dodger regular without a hit. 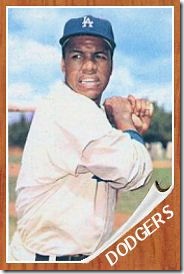 Dennis Bennett was locked and loaded as he was protecting a 2-1 lead when all heck broke lose in the top of the 8th.  LA unleashed an offensive barrage that blew the doors right off the Philly barn.  12 batters in all went to the plate and 8 runners crossed it as Bennett lost everything in one foul inning.  Wills, as usual, started it all off with a single and a stolen base, which rattled Bennett enough to walk Junior Gilliam.  Tommy Davis singled home Wills and things just took off from there.  Wills wasn't done just yet.  His second at bat of the inning was a 2 run double.  Gilliam finished the scoring off with an RBI single to score Wills.  Johnny Podres, who started the game for LA, left after 6 2/3 innings on the short side down 2-1.  Ron Perranoski, who threw just 5 pitches got the final out of the inning and also set himself up nicely to gain the win after LA's offensive 8th.  Ed Roebuck pitched a clean bottom of the 8th, but faltered in the 9th and served up 4 runs to the Phills who were not about to go down without a fight.  Larry Sherry came on in relief to get the final 3 outs and gain the save and clinch the Dodgers sweep.

Posted by distantreplay.org at 3:23 AM