Round 1: Tribe outlast A’s…Tiant flirts with No-No in clincher 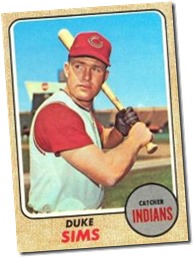 Game 1 saw Catfish Hunter chased in the bottom of the third with two outs after allowing six hits and three runs.  Cleveland scored only one more time but it was in the bottom of the 9th for a walk-off win. It was apparent that Jack Aker was struggling but he had recorded two outs with a runner on 2nd when Reggie Jackson's error allowed the runner on 2nd to march home.  For Reggie it was only a sign of what was to come as he went 2 for 21 with 9 Ks. The tribe scored twice in the first inning and another in the bottom of the second. Threatening to score again in the third, Diego Segui came in to shut down the inning.  Duke Sims had 3 hits on the day and Lee Maye collected 2.
Editor’s Note:  Orion Bell sent this message to me after completing the writeup for game 1.  Let’s all wish him a speedy recovery from his back and shoulder surgeries.  “Marc - I will send the boxes now but the remainder of the story tomorrow. My neck and shoulder are killing me.”

Jim Nash outdueled Sudden Sam.  He fanned 7 without walking a batter.  In comparison, 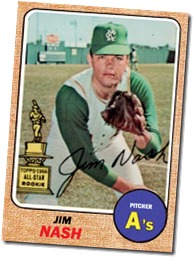 Sudden Sam fanned 6, but walked 3.  Cleveland broke the ice with a solo run in the second when Max Alvis singled, stole second and scored on a Chico Salmon RBI single.  Jim Pagliaroni's two out double in the 4th scored Dick Green and evened the game up a 1-1.  Oakland took the lead in the 6th thanks to an erro by Salmon at second, which turned into a stolen base by Rick Monday and an RBI single by Dick Green.  Nash, who was in the zone, needed just that one run to lock down the win.
Series tied 1-1 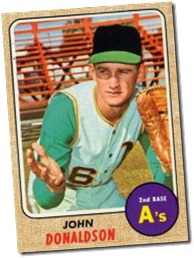 After the Tribe scored two in the top of the 6th to tie the game up at 3-3 the bullpens took over and dominated.  Neither team scored over the final 3 1/2 innings, so the game went to extras.  In the bottom of the 11th the A's got to reliever Romo when Sal Bando singled with one out and stole second.  Rick Monday followed with a walk, but Dick Green lined one back to the box for the second out of the inning.  Pinch hitter John Donaldson lined one through the originator to win the game and give the A's a series lead.
A's lead series 2-1 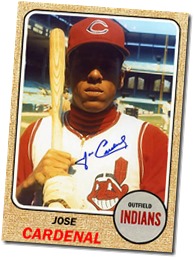 runs in 1 inning) was abysmal.  Those two combined to dig the A's a 7-1 hole that they could never climb out of despite a 4 run 8th inning that made the final score look close.  Tribe lead off man Jose Cardenal (3-5) scored 2 runs and knocked in 1.  Tony Horton, Duke Sims and Larry Brown each knocked in 2.  Starter Stan Williams was 2 for 4 at the plate and gave up just 1 earned run in 7 innings on the bump.
Series tied 2-2 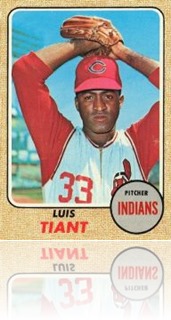 Oakland blew a golden opportunity to close the Indians out in game 4.  Game 5 saw the series venue shift back east to the "Mistake by the Lake", which gave the Tribe a huge home field advantage.  Having Luis Tiant on the mound gave them an insurmountable advantage.  Oakland starter Jim "Catfish" Hunter proved not to be "El Tiante's" equal surviving just 5 innings and allowing 4 runs.  El Tiante was locked an loaded and in the process of throwing a complete game 1 hit shutout, while fanning 11.  Those 4 runs that the Tribe scored for him must have felt like a 4 touchdown lead.  The only suspense on the day would be if Tiant could pitch an no-hitter.  That suspense ended with 2 out in the 9th when pinch hitter Keough lined the first pitch that he saw up the middle for a clean single.  Tiant quickly dispatched Danny Cater for the final out by striking him out with a hook on the corner.
Indians win series 3-2

Posted by distantreplay.org at 12:31 AM