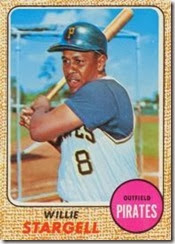 Bob Veale was bad, but thankfully for him and the Bucs Juan Marichal was worse.  Both hurlers couldn't keep the opposing team from the big inning.  First the Bucs got 3 in the 3rd, then the Jints fot 4 in the 4th.  The Bucs answered right back with 4 in the 5th and the Dominican Dandy was heading for the showers.  The Jints chipped away for 2 solo runs in the 5th and 6th to make it a 1 run game, but reliever Ron Kline got the final 4 outs and his 4th save of the tournament.  Donn Clendenon and Willie Stargell both hit big home runs and knocked in 3 apiece.  Marichal is very susceptible to the long ball and the Bucs know how to hit 'em.
Pirates lead series 1-0 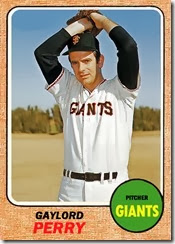 The Say Hey Kid, Willie Mays, hit a 2 run shot with one out in the bottom of the 7th to break a 1-1 tie.  Gaylord Perry loaded up that heavy ball real good for 8 innings and Frank Linzy closed it out in the 9th.
Series tied 1-1 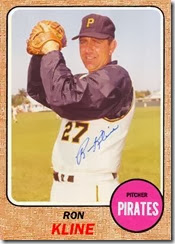 After 6 scoreless innings the Jints took a 1-0 lead on a squeeze bunt from Ron Hunt.  Ironically Hunt, a second baseman by trade bunted home Ray Sadecki (a pitcher) who led off the inning with a double.  Sadecki, who was on base 2 of 3 times today forgot that his primary role was that of a pitcher as he allowed the Bucs to score 2 runs in the bottom of the inning to lose his 1 run lead.  Back to back RBI singles by Maury Wills and Roberto Clemente put the home team ahead for good.  Ron Kline once again performed his magic with 2 scoreless frames for his 5th save of the tournament.
Pirates lead series 2-1 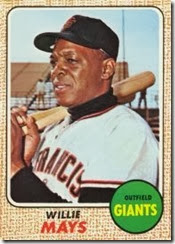 "Must win" pressure was squarely on the back of ace right Juan Marichal, who gutted his way thought 6 2/3 innings and left the game with a 3-2 lead.  The Bucs scratched out an unearned run off of Gibbon in the 8th and when neither team scored in the 9th extra innings were on the docket.  Pinch hitter Dave Marshall led off the top of the 10th with a clean single off reliever Tommie Sisk.  Bobby Bonds forced him at second, but made up for his lack of situational hitting by immediately pilfering second.  Ron Hunt struck out for the second out of the inning.  Sisk tried to pitch around Willie Mays, but the Say Hey kid lined one to right center to put the Jints up. 4-3.  Frank Linzy pitched a near perfect bottom of the 10th for his 2nd save of the series.
Series tied 2-2 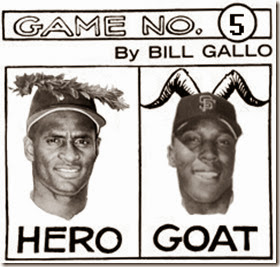 Game 5's, when they are elimination games, are filled with a lot of tension which puts each pitcher under acute duress.  Both Steve Blass and Gaylord Perry were rock solid.  Unfortunately for Perry his defense didn't return the favor.  San Fran made 3 huge errors, with none being larger than the folly perpetrated by Willie McCovey in the 7th.  With one out and 1 on and the Bucs up by just a run Big Mac booted a Matty Alou grounder to put runners on 1st and 2nd.  Up stepped Roberto Clemente (3-5), who launched a 0-1 offering 406 feet over the chain link fence to make it a 5-1 game.  A mere 338 foot solo blast by Willie Stargell 2 batters later put the exclamation point on the Jints sentence.  Fault reliever Mike McCormick for the long balls, but lay equal blame on Stretch McCovey for his gaffe.  The Bucs went to trusty reliever Ron Kline to get the final 8 outs.  Kline closed it out, but not before making it interesting by allowing 2 runs in his first inning of work.  The rest was smooth sailing as the Bucs (#6) upset the #2 seed Jints in a 5 game thriller.  Pittsburgh will open up the LCS vs the upstart #9 seeded NY Mets.
Pirates win series 3-2

Posted by distantreplay.org at 7:26 PM