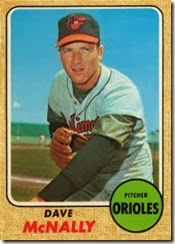 A classic pitching duel loomed under threatening skies in Charm City.  Sudden Sam McDowell would pitch 8 innings and strike out 8 before losing to the Orioles 4-1.  Baltimore opened the scoring against McDowell in the second on a Davey Johnson triple to right center field and a 414 foot home run by Baltimore catcher Andy Etchebarren.  Baltimore got to McDowell again for 1 in the fifth on a Mark Belanger single, a bunt and then an RBI single by Don Buford.  Cleveland answered back in the top of the 6th against Dave McNally with a solo HR (417 feet) to centerfield by 3rd baseman Max Alvis.  Baltimore added on more in the 8th on a Frank Robinson home run down the short left field line.  Both starters went the distance. 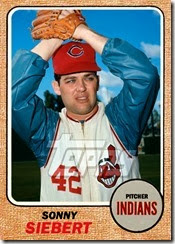 all day and with a few more breaks might have thrown a no-hitter.   Cleveland got off to a quick start with 3 runs in the first 2 innings against Baltimore starter Jim Hardin.  Cleveland scored 2 in the first on a Jose Cardenal walk, a fielders choice, a Lou Johnson triple and a Tony Horton sacrifice fly to deep right center field.  The Tribe added another run in the second on a Vern Fuller triple and a sac fly, again to deep right center, by Max Alvis.  Baltimore finally broke through in the bottom of the 6th when Mark Belanger led off with a single, moved to second on a bunt and scored on a Merv Rettenmund single…..this was to be the only run Baltimore would score all day.  Cleveland added 3 more in the top of the 7th on a wlak, triple and two singles to chase Hardin.  Sonny Siebert dominated the rest of the way ending the game with 8 strikeouts. 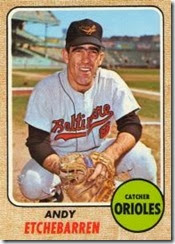 A total of 8 hits were scattered about by the pitchers for both teams.  It took six innings before Baltimore was able to break through with 2 runs against El Tiante on a Don Buford single, a Paul Blair walk and an RBI single by Frank Robinson.  Boog Powell then followed with a sac fly to center.  Both starters went 8 innings with the score remaining Baltimore 2 Cleveland 0 as both starters yielded only 3 hits each.  In the top of the 9th, Vincent Romo came on in relief of Tiant and gave up a run to Baltimore on an Andy Etchebarren home run.  Eddie Watt then came in to make the game interesting by Walking Jose Cardenal and giving up a single to Russ Snyder.  However Duke Sims was enticed into a 1-4-3 double play before Watt got Tony Horton to ground out to Mark Belanger to end the game.

Game 4  Baltimore Gets Off To A Fast Start
Cleveland Stadium, Cleveland  70 degrees and 5 mph out to RF
Baltimore: Wally Bunker
Cleveland: Stan Williams 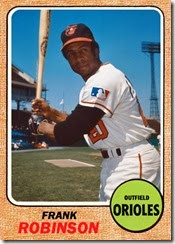 run homer by Davey Johnson off Stan Williams.  In the third, Baltimore added 2 more runs off a Frank Robinson solo home run, a Brooks Robinson double and an RBI single by Davey Johnson.  In the 4th, Baltimore staked itself to an 8-0 lead when Don Buford walked, Merv Rettenmund doubled to right center and Frank Robinson singled in both Buford and Rettenmund to close out the Baltimore scoring for the day.  Baltimore veteran hurler Wally Bunker held the Indians in check for five innings before giving up 2 runs in the 6th on a Tony Horton home run down the left field line.  With that, the series scoring came to an end and Baltimore took the series 3-1.
Well played series, a lot of fun to play.  Well played by Bill.
--submitted by Mark Nixon--

Posted by distantreplay.org at 12:53 AM