Rd 3-Game 2: “Baltimore Comes Back to Win a Tight One” 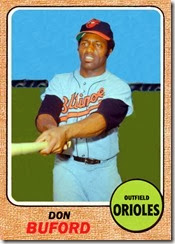 runs in the top of the 2nd.  Boston pushed all of their runs across the plate on 5 singles, a passed ball and a sacrifice fly by Reggie Smith before Hardin was able to close out the inning by enticing Carl Yastrzemski to pop to short stop and Ken Harrelson to fly out to deep left field.    Boston extended the lead with another run off Hardin in the 3rd on 3 more singles and a walk, the run scoring on a single to center by George Scott and an error by the Baltimore centerfielder Merv Rettenmund.  Starting the 4th inning, Baltimore replaced starter Jim Hardin with long relief man Roger Nelson who would pitch5 innings of scoreless ball to allow Baltimore to climb back into this one.  Baltimore broke through for 2 in the bottom of the 4th as Mark Belanger lined a bases loaded single up the middle scoring Brooks Robinson and Boog Powell before Reggie Smith threw out Davey Johnson trying to go from first base to third.  The Orioles added two more in the top of the 8th on a Boog Powell two run homer to left center, his second in two games.  Heading into the 9th Boston held a 1 run lead with Sparky Lyle on the mound.  Larry Haney, pinch hitting for Mark Belanger, started the inning with a single through the infield.  Boston then brought in relief man Lee Stange to face Paul Blair.  Blair sacrifice bunted pinch runner Dave May to second before Don Buford lined a triple down the right field line to tie the game at 5 before Strange pitched his way out of the inning.  In extra innings, Don Buford again came through for Baltimore with a two run, walk off home run to left center against Boston hurler John Landis.  Buford’s hit gave him 3 on the day, lacking only a double to have hit for the cycle.
Baltimore leads series 2-0
--submitted by Mark Nixon--

Posted by distantreplay.org at 8:39 AM