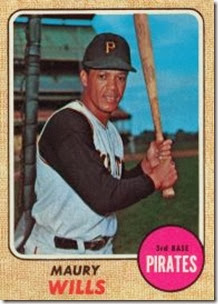 get a win.  You can't be anymore terrific than Tom was today.  Facing elimination the Bucs trotted out 6 pitchers and treated every AB as if it was their last.  They broke a scoreless tie in the 7th when Maz reached base on an error by his opposite number Ken Boswell.  A single by Gene Alley put runners on the corners.  Maz would score when Jerry Grote was caught napping and a ball in the dirt rolled right by him.  Could the Bucs make that one run stand up ?  The answer was yes, until the top of the 9th when Seaver bunted home Agee on a perfectly timed squeeze play.  New York was incapable of scoring in their 4 at bats in extra innings.  Pittsburgh was finally able to scratch across a run on a sac fly hit to shallow center by Maury Wills, that scored Gene Alley in the bottom of the 13th to force a decisive game 7.
Series tied 3-3

Posted by distantreplay.org at 5:52 PM