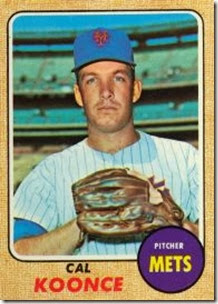 for 5 runs in the bottom of the 7th to tie the game.  Future Met Donn Clendenon's 3 run blast ignited the stoic Forbes Field crowd.  Luke Walker, Pittsburgh's 6th pitcher on the day, faced the Amazin's in the top of the 9th and let his guard down and served up a lead off single to Met reliever Cal Koonce, who scored on a a 3 out single by hard nosed catcher Jerry Grote.  Koonce, who was perfect in the 8th inning, repeated his output in the 9th to get the win.  Both teams combined for 26 hits.  Pirate leadoff man Maury Wills was 4 for 5 with 2 runs scored in this losing effort.
Series tied 1-1

Posted by distantreplay.org at 5:34 PM