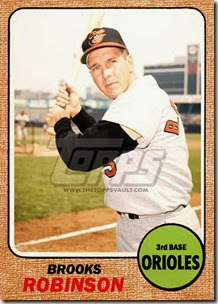 Manager Nixon was overheard saying ' I hate Ed Charles'. With two out in the bottom of the 1st Jim McAndrew hit Frank Robinson in the ribs, Boog Powell singled over 2nd base , Brooks Robinson (3 for 4) singled to left scoring Frank Robinson. Game tied. In the third Cleon Jones singles and stole his first base of the tourney. Jerry Grote doubled off the wall scoring Cleon Jones and scored on an error by Davey Johnson. Things did not look good for starter Tom Phoebus but he settled down. In the 4th Brooks Robinson doubled off the wall, Davey Johnson singles to right, Elrod Hendricks singles to right, Mark Belanger has an infield single, even pitcher Tom Phoebus doubles off the wall. Not a good inning for Jim McAndrew who then gave Don Buford a free pass. Merv Rettenmund grounds into a double play and Frank Robinson doubles off the wall in left. Al Jackson came in to finish off the inning. Orioles lead 6-3. Both pitchers settled down allowing allowing only 1 walk between them. Baltimore went to Pete Richert in the 7th inning. In the 8th Jerry Grote sent it 321 feet over the left field wall. With 1 out in the 9th Duffy Dyer singles. Manager Nixon calls on Moe Drabowsky who got Bud Harrelson and JC Martin to ground out. Baltimore wins 6-4. Winning pitcher and Game MVP Tom Phoebus goes 6 innings allowing 4 hits, 3 walks and 4 Ks. Moe Drabowsky gets the save. Jim McAndrew takes the loss on 3 2/3 innings allows 9 hits and 6 runs. Series tied 1-1.

Posted by distantreplay.org at 10:44 PM