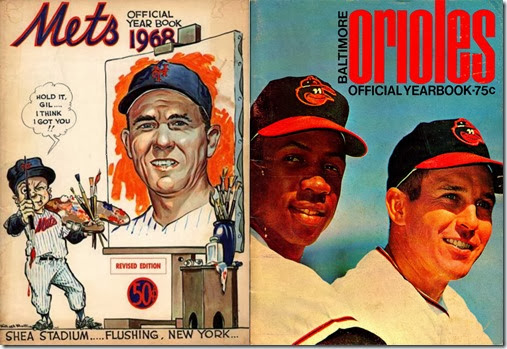 The two managers strolled out and met with the umpires at home plate. This meeting was a year early as the Mets and Orioles are not supposed to meet until 1969. They shook hands, handed the umpires the starting lineups and wished each other good luck". Thus begins the 1968 World Series. The Orioles Manager Nixon with four days rest between series opted to go with their ace Dave McNally, but who would the Mets start with only one day rest start? Mets Manager Chisholm walked up to the young kid once again. The kid looked up "Me again". Yes Nolan. Nolan had only one other start in this tourney against none other than Bob Gibson. Jerry Grote came over put his arm around the kid and said "You gotta’ believe in yourself, Coach Chisholm does".

Posted by distantreplay.org at 7:30 PM