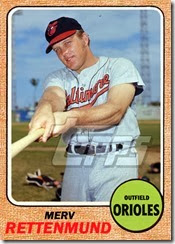 The series opened on a cool day with rain in Baltimore.  The O’s got off to a quck start against Boston starter Ray Culp as Boog Powell knocked in Merv Rettenmund with a two run homer to right center in the bottom of the 1st.   The game then settled into a pitcher’s duel until the bottom of the 5th when Baltimore struck for 3 more runs against Culp on 4 singles, a walk and a fielder’s choice.  The scoring was over in this one until Boston broke through against McNally for 1 in the top of the 8th on doubles by Reggie Smith and “Hawk” Harrelson before Gene Brabender came on in relief of a tiring McNally.
Baltimore leads series 1-0

Posted by distantreplay.org at 8:33 AM