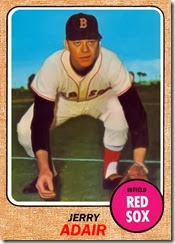 The series headed to Bean Town and another 11 inning duel.  Baltimore did all of their scoring in the top of the 4th against Boston starter Bell, scoring 7 times on 3 singles, a double, 3 walks and a hit batter.  Unfortunately, Baltimore pitching was not up to the task on this day and the lead was squandered away over the next three innings as Boston fought back and forced this game into extra innings on nine singles against Bunker and John Morris.  Baltimore shortstop committed an uncharacteristic 2 errors in this one, giving him 3 for the series to date.  Big blows for Boston came from Carl Yastrzemski and Rico Petrocelli during the rally.  With both starters long gone the game was turned over to the bullpens.  On  this day, Boston’s pen outdueled the Boys of Baltimore.  In the bottom of the 11th, Reggie Smith lead off with a single to centerfield off of Pete Richert, and moved to second on a sac bunt by Mike Andrews.  Richert enticed Yaz to fly out to shallow center before issuing an intentional walk Ken Harrelson to get to light hitting Jerry Adair.  Adair promptly lined a single to left and Smith scored the game winner for Boston.  Baltimore leads series 2-1
--submitted by Mark Nixon--

Posted by distantreplay.org at 8:47 AM