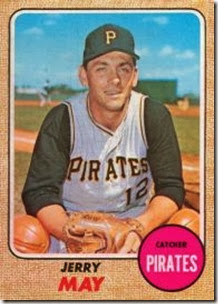 Cleon Jones and Ed "The Glider" Charles hit back to back homers to lead off the game for the Amazin's as the series moved to Flushing.  Met starter Dick Selma gave those two runs back plus two more as the Bucs scored 4 in the top of the 2nd.  An RBI double by Bill Mazeroski and a 3 run shot by backup catcher Jerry May did the damage.  Maz's RBI single in the 8th added an additional run to make it 5-2, which wound up being the final score.
Pirates lead series 2-1

Posted by distantreplay.org at 5:38 PM