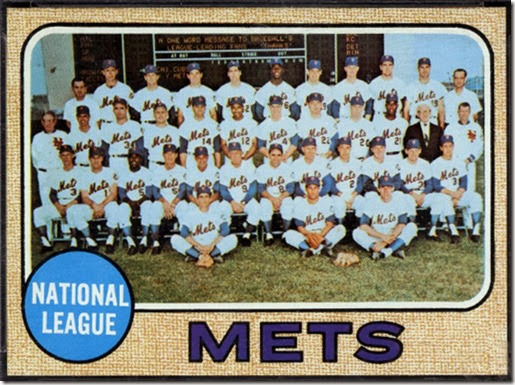 This was a long tough series, congrats to Mark for winning the ALCS and thanks to him for the challenging series. Ironically as Marc “Simarc” posted at the start of the tourney 'The Year of the Pitcher' and it showed in the World Series. All 7 game MVPs were pitchers.

Thanks to Marc for organizing the tourney and thanks to all the participants.

As Jerry Grote says ‘You gotta believe’ and The Amazin’s Believed and became the 1968 KOD Tourney World Champs.

Editor’s Note:  Special congratulations to Bob “The Chiz” Chisholm for taking a #9 seeded Mets team that finished under .500 to the pinnacle !  Along the way he knocked off some real powerful teams managed by some top notch skippers.  Can he repeat in 1969, with everyone gunning for him ???  This time the Metsies won’t be able to sneak up on anyone and surprise the world.

Posted by distantreplay.org at 11:24 PM