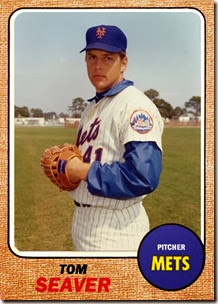 First three innings is a pitchers duel between Tom Seaver and Jim Hardin. Don Buford singles and Jerry Grote guns him down attempting to steal. An error by JC Martin puts Frank Robinson on base who goes on to score on a Boog Powell double off the left field wall. Back to the pitching duel until the 6th.  Jerry Grote walks with one out, Art Shamsky singles between 3rd and short, Ken Boswell flys out to center. Ron Swoboda earns a walk and with the bases loaded JC Martin walks scoring Jerry Grote. Bud Harrleson strikes out to end the 6th with the game tied at 1. In the 7th with two out Mark Belanger singles and pinch hitter Larry Haney reaches first on a Al Weiss error who took over from Bud Harrleson, but that is all the Orioles can muster as Tom Seaver gets Don Buford to fly out.  Eddie Watt takes over the pitching reigns for Baltimore and a return to a pitching duel. In the bottom of the 8th with one out Art Shamsky singles to right center, Gene Brabender comes to the mound and Ken Boswell lines a single up the mild and Ken Shamsky heads to third. A wild pitch and Ken Boswell scores. This comes back to haunt the Orioles. In the 9th Ron Taylor relieves Tom Seaver after Tom Seaver hits Davey Johnson. Ron Taylor strikes out the next 2 and Elrod Hendricks flies out to deep right.  The Mets win 2-1. Winning pitcher and Game MVP Tom Seaver goes 8 innings allowing 6 hits, 1 run, 1 run and 3 strikeouts. Ron Taylor earns the save, Eddie Watt takes the loss.
Mets lead the series 2-1
--submitted by Robert Chisholm--

Posted by distantreplay.org at 10:49 PM