Rd3-Game 4: “Baltimore Again Gets Off To A Fast Start” 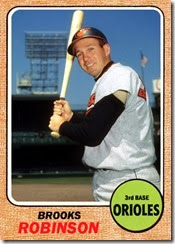 by a two run home run by Don Buford, and RBI double by Brooks Robinson and an RBI single by Davey Johnson.  In the 5th Baltimore added another run on a bases loaded walk to Andy Etchebarren.  Boston opened it’s coring with 1 run in the bottom half of the 5th as Juan Pizarro opened the inning with a single, moved to second a another Mark Belanger error on a Mike Andrews ground ball and scored on a Carl Yastrzemski single before Ken Harrelson grounded out to end the inning.  Boston added another run in the 7th as did Baltimore in the top of the 8th.  In the ninth the teams traded 3 run innings against the tiring relief corps before the game came to an end with Baltimore on the winning side 9-5.

Posted by distantreplay.org at 8:50 AM