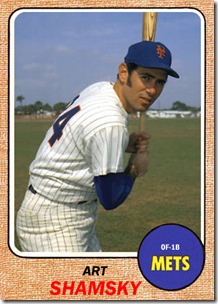 Jerry Koosman survived a bumpy second inning to throw blanks the rest of the way and eliminate the Bucs in a clutch Game 7 road victory.  Pirate ace Steve Blass allowed the Amazin's to score in 3 of the 4 innings that he was on the hill.  New York set the pace with 3 opening inning tallies.  Ken Boswell's RBI single sent Cleon Jones around to score.  Art Shamsky would score on a sac fly by Swoboda and Boswell would score on Ed Kranepool's liner up the middle.  An uncharacteristic error by slick fielding shortstop Bud Harrelson gave the Bucs their first run of the day in the 2nd and Fred Patek's grounder up the middle made it 3-2.  Koosman would not allow another run the rest of the day.  New York would go up by two when Shamsky homered to lead off the 3rd and go up by 4 when Koosman doubled home Kranepool and Shamsky (3-5, 2 RBI) singled home Kooz.  Three more Met runs in the 9th provided a 7 run margin of victory.  New York caps off an incredible run through the NL Bracket as the 9th seed, to get to the finals vs the winner of the Boston/Baltimore series.  Special recognition has to go to Robert “the Chiz” Chisholm for managing the Mets as if his name was Hodges.  I would be remiss in my duties if I didn’t throw out a huge compliment to Marc “Don’t spell it with a K” Becker, who took a 6th seeded Pirate team to a decisive game 7.  Lots of bracket busters in the NL that’s for sure !
Mets win series 4-3

Posted by distantreplay.org at 5:58 PM