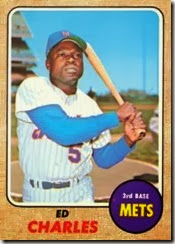 Up 2-1 after 7 the Reds brought in Clay Carroll to replace a tiring Gary Nolan.  Kenny Boswell singled home Jerry Grote with 2 out to tie the game.  In the 9th, the Glider, Ed Charles singled home Buddy Harrelson to put the Amazin's up 3-2.  Cal Koonce set the Reds down in order by getting Tony Perez to fly to center then fanning Lee May and Johnny Bench to end it.  Kudos to Ron Taylor who pitched 2 2/3 scoreless innings in relief of starter Don Cardwell who threw 113 pitches by the 6th inning.
Mets lead series 1-0 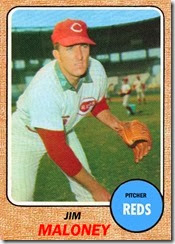 easy victory.  Tom, was not so terrific, in his 3 inning stint where he gave up 6 runs on 9 hits.  Reliever Alvin Jackson (3 runs in 5 innings) did little to inspire confidence as well.  On the other hand Jim Maloney fanned 6 and gave up just 1 earned run in 8 innings before handing the ball off to Davidson to end it.  Six Red batters had 2 hits.  Alex Johnson was the only Red regular not to get a hit.  Pete Rose, Tommy Helms and Johnny Bench each had 2 RBI's.  Lee May, Bench and Rose added homers
Series tied 1-1 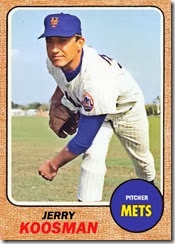 Rookie Jerry Koosman's solo blast in the 7th started off a 3 run rally to give the Amazin's a huge victory in Flushing.  Besides his long ball prowess Mr. Koosman found a way to add a complete game victory to his arsenal.  Kooz frustrated the Reds all day by allowing 11 baserunners but never breaking or allowing the big inning.  Five Met batters, including Koosman, all knocked in a run in a collaborative group effort.
Mets lead series 2-1

If Koosman's victory last night was a beacon of light, McAndrew's performance today was 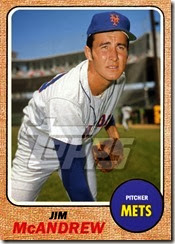 light out.  Other than a seeing eyed single, by his opposing numer (Culver), with 2 out in the bottom of the 3rd Jim McAndrew was flat out stingy.  Cincy only had once baserunner all day long.  While McAndrew wasn't flashy or electric (3 k's), his pitches kept the Reds big hitters off stride all day long.  New York jumped out to a 2-0 lead with two in the bottom of the first.  Four singles in a row culminated in Ed Kranepool driving home Boswell to make it 1-0.  Harrelson's squeeze play brought in Stahl and the Amazin's never looked back.  A solo run in the 7th on a Harrelson single and two more in the 8th made the Met lead that much more insurmountable.  With McAndrew cruising along the Amazin's upset the Reds and head to the NLCS.
Mets win series 3-1

Posted by distantreplay.org at 7:24 PM