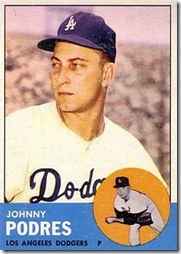 Since 1955 the Dodgers have turned to one guy to be their stopper in big games.  That guy is Johnny Podres, who cemented his Dodger legend by winning game 7 of the '55 series 2-0 over the Bronx Bombers.  Podres saves his best for the big games. His undefeated 1963 post season is evidence that his star shines brightest while others just fade away.  Baltimore would jump out to a 1-0 lead in the bottom of the second thanks to an error by third baseman Ken McMullen with 2 out.  That error would allow Aparicio the opportunity to single home Al Smith, for what would become Baltimore's only run of the day.  The Dodgers would tie it up with an unearned run of their own in the 3rd.  An error by Russ Snyder in left on Maury Wills' two out single allowed Junior Gilliam the chance to single the fleet footed Dodgers shortstop home to make it 1-1.  Podres would get some run support in the 5th as the O's defense went to pot.  Errors by Brown behind the plate and Adair at second allowed Willie Davis and Podres to score.  Tommy Davis would wack solo homers to lead off the 6th and 8th innings to give Podres more than enough cushion to take his game to the finish line.  Podres would finish the game and allow just 1 unearned run, while allowing just 4 hits and fanning 6.
Series tied 2-2

Posted by distantreplay.org at 12:57 AM