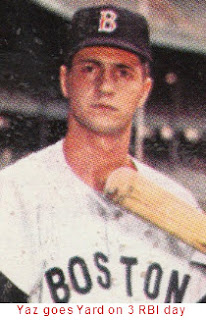 Red Sox nation began to rejoice as Yaz hit a 2 run shot and Lee Thomas followed that with a solo blast to put Boston up 3-0 after 1 inning of play.  An RBI double and an RBI single by Yaz in the bottom of the second chased Narum from the hill.  Boston had a 5-0 lead and the Nats looked like toast.  Alan Koch was given the ball to mop up and turned in a splendid 5 inning shutout performance.  By the time Koch's day was done the 5-0 Red Sox blowout was now a tenuous 5-3 lead.  Dick Radatz would start the 9th with a 2 run lead and a chance to close out the Nats.  Fred Valentine's pinch hit RBI single with 2 out made it a 1 run game.  Both Valentine and Jim King moved up 90 feet as Boston elected to go for a game ending play at the plate.  With runner on 2nd and 3rd game 2 hero Moose Skowron came to the plate and hit a rocket ship that found it's way into third baseman Frank Malzone's glove to end the series.  Yaz would have 3 RBI on the day as the Sox advance.
Red Sox win series 2-1
Posted by distantreplay.org at 10:03 PM