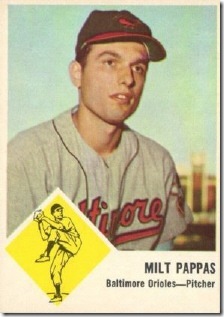 After his game 2 semi-meltdown Dodger fans were hoping that Sandy Koufax could rebound and be his Cy Young Award winning self again in this win or go home game.  Koufax was magnificent in allowing just 3 runs in a complete game effort that 99% of the time would result in a Dodger win.  Today was that 1% day.  While Koufax was magnificent, his opponent Milt Pappas, was mystifying.  Minus a 7th inning lead off double by Maury Wills, Pappas was perfect on the day.  Once could say he "Out Koufaxed" Koufax.  The game was scoreless until the top of the 6th.  Al Smith and Luis Aparicio led off the inning with back to back singles to put runners on the corners.  With the infield in and charging Pappas dropped down a bunt.  Smith broke for home as soon as Koufax released the ball and luckily for him Pappas put it on the ground.  Koufax charged hard, but had no play on Smith.  The only play was to first for the easy force.  Jerry Adair would follow that with a 4-6-3 DP, but the O's had a 1-0 lead on a day when runs would not come easy if at all.  The top of the 7th was LA's only opportunity to get back in this game.  Wills' lead off double was their first hit on the day.  Gilliam's sac bunt put Maury on 3rd with 1 out.   Pappas would give Fairly and intentional pass in order to face LA's hitting star Tommy Davis.  Facing Davis in a run producing situation is not what any pitcher would enjoy, but Pappas had no choice.  Walking Fairly created a double play scenario, which would end the inning and not allow LA to tie the game.  Pappas tried to paint the corners and ran the count to 3-1.  he could put Davis on and take his chances with the ever so clutch Wally 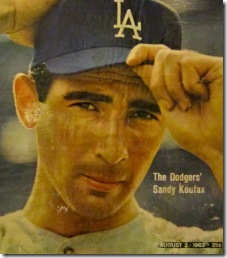 Moon or let the chips fall where they may.  Pappas decided to go after Davis and take his chances.  The 3-1 offering came right down Broadway and Davis turned on it and hit a bullet that basically found Aparicio's gold glove.  Luis backpedaled, then flipped it to Adair to force Fairly easily.  Adair avoided the hard sliding Fairly and threw a pea to Bob Johnson at first to nip Davis for the inning and quite possibly series ending DP.  With Pappas going as well as he was going Davis' DP ball looked to be the kiss of death for LA.  As it would turn out that's exactly how it would work out.  Pappas easily set the Dodgers down in the 9th to clinch the O's second series of the decade for manager Justin Ryan over the 1962 defending champion Dodgers.
Orioles win series 4-2

Posted by distantreplay.org at 1:15 AM