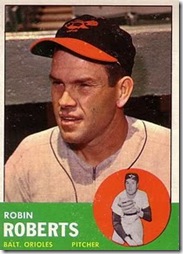 Bob  Johnson doubled home Russ Snyder and Robin Roberts to make it 2-0 O's.  Drysdale looked rattled and gave free passes to Brandt and Gentile to load the bases.  John Wesley Powell, know around these parts as "Boog", crushed a 3-1 offering to dead center that Willie Davis had to crash against the wall to catch.  Davis bounced up from his glancing blow with the wall to hit the cutoff man perfectly, but he was way too deep to even have a play on Johnson who could have crawled home to make it 3-0.  Drysdale would get back on course and not allow a run the rest of the way, but LA was down 3-0 and Roberts was looking like it was 1950 all over again.  The top of the 9th saw Gilliam ground out back to the box for the first out.  Ron Fairly would serve a double down the left field line for the Dodgers first baserunner since the 6th.  Tommy Davis would hit a bullet off of the second base bag to easily score Fairly and finally get the Dodgers on the board.  Wally Moon would step up to the plate in hopes of recreating his game 3 heroics, but just got under Roberts 2-2 offering for a long fly ball to right that never seriously threatened anyone.  Willie Davis would be the Dodgers last hope.  Roberts jammed Davis, who popped up weakly to Johnson at second to end the game.  Chalk the win up to the veteran, Roberts, who gave up 1 run on 5 hits while going the distance.
Orioles lead series 3-2

Posted by distantreplay.org at 1:03 AM