1964 was a year of change.  In February the Beatles burst on the scene and the world of pop culture was never going to be the same.  The US saw incumbent President Lyndon Johnson defeat Barry Goldwater in a landslide election.  A war in a little know place called Vietnam began to heat up and a loud mouth named Casius Clay shocked the world by defeating the "unbeatable" bully Sonny Liston for the World's Heavyweight Title.

Future famous people like Eddie Vedder and Sarah Palin were born in 1964, so was Sandra Bullock and a former skinny kid named Barry Bonds.

In baseball, 1964 would be known as the final year of the Yankee dynasty.  From the 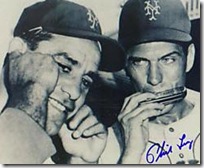 early 1920's- 1964 the New York Yankees dominated baseball to the tune of 29 pennants in 40+ years.  By 1964 the Yankee dynasty was running on fumes and barely staying in contention.  This was an aging ball club trying to hold on for one last hurrah.  For most of the summer the team couldn't get out of it's own way, but somehow stayed close to contention.  By the first week of September they were 4 games out.  Ownership decided to fire the manager, Fan Favorite Yogi Berra, after the season ended no matter what.  What happened was the magical harmonica incident.  Utility infielder Phil Linz was playing his harmonica on a team bus ride after a painful late season loss.  Berra, who never lost his cool, yelled out to cut it out.  Linz asked Mickey Mantle what he said, and Mantle ever the team jokester said, "Yogi said play it louder".  Linz played it louder and of course a huge scuffle broke out.  Most teams would have folded up like a cheap suit, but not the Yankees who went on a tear and won their final pennant of their great stretch. 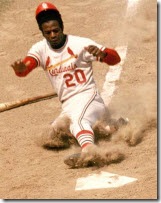 The Yankees were expecting to play the Phillies in the World Series and with the Phightin's up by 6 games with 8 left to play that was a logical conclusion.  Unfortunately for the Phills they forgot to tell the Reds and the Cardinals, who kept on winning, even though most thought the pennant was sewn up.  Philly controlled the NL since the Spring, but began fading down the stretch.  To magnify their swoon was the fact that their manager Gene Mauch went into panic mode and only pitched two starters over the final week of the season.  Mauch's panic burnt out Chris Short and Jim Bunning and opened the door for Cincy and St. Louis.  While the Phightin's were winning early on, the Cardinals were going nowhere fast.  That was until St. Louis made a block buster deal in June that sent sore armed starter Ernie Broglio to Chicago for enigmatic outfielder Lou Brock.  Most viewed the deal as a page 80 event in the newspaper and didn't pay much attention to it.  Some even thought that the Cardinals got fleeced since Broglio was one of their top tier pitchers and Brock was a singles hitter who struck out like a home run hitter.  That all changed, because the deal was a wake up call to Brock who shortened his stroke and began serving up line drives that became base hits.  Base hits from Brock became immediate doubles due to his base stealing prowess.  The Cardinals began feeding off Brock, who hit .348 over those final 100 games that he played for the Cards.

1964 featured one of the closest pennant races ever for both leagues.  This tournament 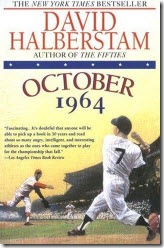 can be anyone's.  I recommend that anyone participating read a copy of David Halberstam's book appropriately titled “October 1964”.  I read it twice and I have to say that it does not disappoint, as it compares and contrasts the declining Yankees and the ascending Cardinals.  You get to see how the Yankees became the poster child of an America of the past.  A team built in the image of corporate America.  Clean cut, supposedly wholesome and definitively white.  Contrasted to that were the Cardinals, who reflected the more integrated National League and a changing America  While the Yankees team leader was everyone's All-American boy, Mickey Mantle, the Cards team leader was Bill White.  Bill was an educated black man who spoke clearly and intelligently.  He was a tough competitor who represented a new era of black athletes.  White wasn't just glad to be in the majors, he was here to lead men of all colors to victory.  Men like Brock, Curt Flood, Julian Javier and the immortal Bob Gibson accented how an integrated professional team could win.  Halberstam does a great job in his book  contrasting how the Yankees had only one starter who was a man of color...Elston Howard when compared to the Cardinals or the rest of the NL for that matter.  I do think Halberstam did a dis-service to Howard as painting him as sort of a lackey or a man of the establishment.  Ellie 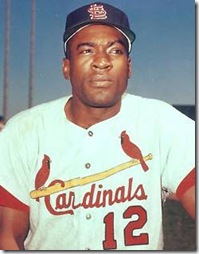 Howard was one of the most respected players of his generation.

The World Series that year was a classic.  It went 7 games.  For the old guard it was Mickey Mantle's swan song.  The Mick was able to turn back the clock for one more fall classic and slam 3 homers, but that would not be enough as Gibson and company would win out in the end.  Speed and youth would win out over experience and power.

1964 is a crossroads year for baseball, where the old guard meets up against the young guns.  Any one of 7 teams has a shot at winning this tournament !  With 10 teams in each league, the bottom 4 teams will be seeded in a best of 3 qualifier round.  Round #1, or the LCS round will be a best of 5 and the LCS and WS rounds will be a best of 7 event.

Sit back and enjoy the games…I know I will !

Posted by distantreplay.org at 8:09 PM