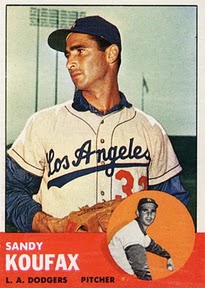 LA headed home needing 2 wins to stave off elimination.  On the hill was the incomparable Sandy Koufax, who had a rocky going in his last outing where he gave up 5 runs.  Koufax did however throw 5 shutout innings to finish up that game, so all fingers pointed to him having gotten his "mojo" back.  Koufax had his "mojo" and then some as he showed early on that he was going to give out hits like Jack Benny gave out cash.  Milwaukee would would get only 3 hits on the day and never see a runner advance past second.  With all of Koufax' dominance the Dodgers themselves weren't exactly knocking the cover off the ball.  Thanks to a heroic performance by Brave starter Denny Lemaster (8 IP / 1 ER), the game remained scoreless until the bottom of the 6th.  Maury Wills singled to lead off the inning then advanced to second on a Junior Gilliam sacrifice.  Tommy Davis, who doubled in his last at bat, singled to center and watched Wills score easily to make it 1-0.  The way Koufax was pitching a 1-0 lead seemed like a 10-0 lead.  Milwaukee could not solve the great lefty as Koufax fanned 8 in this vintage 3 hit shutout.
Series tied 3-3
Posted by distantreplay.org at 1:06 PM