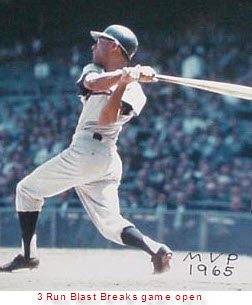 For 8 innings KC fans were treated to a magnificent pitcher's due.  Bob Allison would lead off the game with a homer off of Segui, but that would be it for the Twins until the top of the 9th when Segui lost his dominance.  Minnesota would erupt for 5 unanswered runs in that inning to put the game away and clinch the series.  Zoilo Versalles 3 run shot was the big clout that put it away.  Jim Kaat was brilliant going the distance and giving up just 1 run.  Segui fanned 8 and looked like a world beater until that fateful 9th innings.
Twins win series 2-0
Posted by distantreplay.org at 8:57 PM